We Will Meet 2019 Revenue Target—Ken 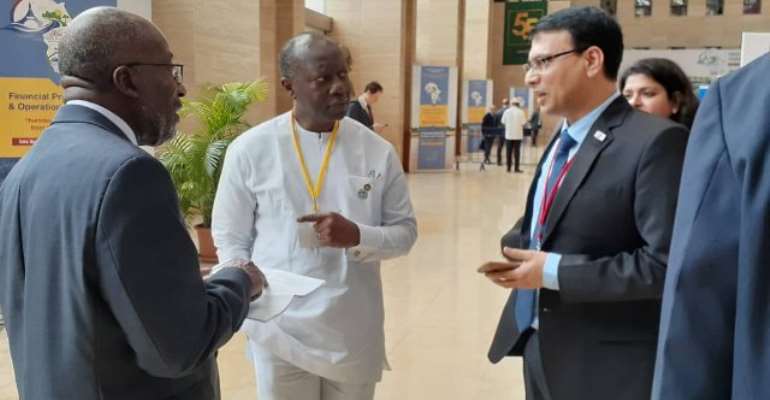 Finance minister Ken Ofori-Atta engaging some participants at the meeting

The country over the years has had some challenges with regards to revenue mobilization in terms of raising the required taxes to march the level of economic activities.

Government last year projected to collect about ¢40 billion cedis but missed out on this target by a little over 5%.

The Country’s tax-to-GDP ratio is said to be around 12%, even though according to the Finance Minister, government should be doing about 20%.

There have been calls on government to review the tax exemptions granted to investors and businesses, which experts say is causing it to lose more than $2 billion.

But while some analysts have blamed this challenge on the current structure of the economy which makes it difficult to mobilize the required revenue, others have blamed it on the mechanism used to collect these taxes.

But the minister has maintained that a lot of planning and strategy has gone into dealing with these problems and he is optimistic that measures instituted so far would start yielding the desired results even before the end of this year.

Presentation of the Mid-Year Review

Mr Ofori-Atta has also indicated he would use the Mid-Year Review to adjust some of the targets while exploring other strategies to deal with the revenue challenge.

The country’s covering government fiscal operations required the Finance minister to review some of the estimates outlined in the budget to be review before July 31.

Government through the finance ministry recently appointed three new commissioners to the Ghana Revenue Authority to help run affairs at the institution.

They are expected to drive a number of critical transformational changes at the Authority.

The Finance Ministry also moved around some 1000 persons at GRA.

Although some industry watchers have criticised this move arguing that the challenge with revenue mobilization is not a personal issue but, rather structural one, the Finance minister disagrees.

He told Joy Business that government’s initial engagement has established that there is a human factor in dealing with the revenue challenges facing the country.

“We had people from inside for a long time and I believe the time has come to try some fresh hands to help with revenue mobilization,“ he said.

He added that “With these changes, things would be more targeted this time around because these new people don’t have any traditional ties with GRA and my expectation is that this could help with the situation at the Authority”.