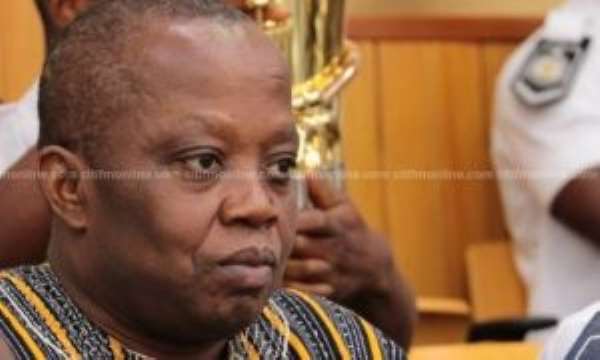 “The thing is how many people have declared? If you have not declared and you are here, no problem, don't declare. But we are coming. We will get you because I have just given instruction to my team that we will do a country-wide survey institution by institution.”

The Auditor-General, Daniel Domelovo has served notice that he will go after all public officials who have failed to declare their assets.

His said his outfit is already preparing a thorough survey of all public officials.

The Auditor General disclosed this at a public forum held last Friday.

A person who holds a public office is expected to submit to the Auditor-General a written declaration of all property or assets owned by, or liabilities owed by, him whether directly or indirectly, according to Article 286 of the Constitution.

But the Auditor-General cannot sanction any public officer for failing to declare their assets.

An allegation that a public officer has contravened this part of the law can be made to the Commissioner for Human Rights and Administrative Justice (CHRAJ), who can cause the matter to be investigated.

The Chief Justice can also take action against persons who fail to declare their assets upon a report from the Auditor General.

It should also be noted that Act 550, which requires the mandated public officer to submit a sealed envelope to the Auditor-General, also states that the Auditor-General has no right to open and check or verify the contents of the asset declaration form.

The constitution stipulates that only CHRAJ may open it up when there is a controversy in line with due process.

Properties to be declared include lands, houses and buildings, farms, concessions, jewellery of the value of ¢5 million or above; objects of art of the value of GH¢5 million among other properties as are specified on the declaration form.

The Auditor General is also pushing for public Servants who earn GHc 3,727 and above as salaries to be required to declare their assets.

He explained previously that this is because that figure is the minimum salary of a director in the civil service.