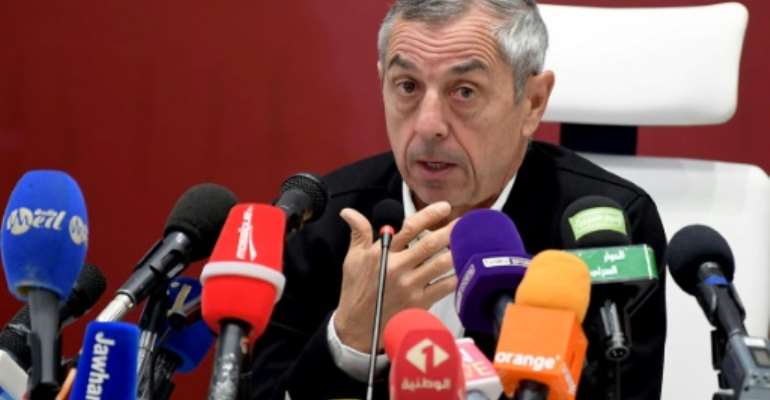 Tunisia coach and former France star Alain Giresse speaks to the media ahead of the Africa Cup of Nations in Egypt. By FETHI BELAID (AFP/File)

Former France star Alain Giresse makes a fourth attempt to win the Africa Cup of Nations as a coach when he leads Group E favourites Tunisia in Egypt this month.

Now 66, he steered Mali to third place in 2012, but subsequent campaigns with Senegal and Mali ended in first round exits.

Tunisia should prove too strong for Angola, Mali and debutants Mauritania, but Carthage Eagles supporters will expect the team to go much further.

Here, AFP Sport looks at a section where Angola and Mali are expected to slug it out to be runners-up and claim the other guaranteed place in the second round.

The Portuguese-speaking southern Africa country are back after failing to qualify for the last two editions, but it was a close call.

Needing maximum points away to struggling Botswana, they scraped a 1-0 win through a goal from Wilson Eduardo, one of several Portugal-based professionals in the squad.

The best they have achieved in seven previous appearances is two quarter-final appearances and they will do well to match that feat.

Verdict: A round-of-16 place would seem the limit

The west African nation provided some of the pre-tournament drama with a threat of disqualification hanging over a squad that was named 96 hours after the deadline.

World body FIFA warned Malian football officials to get their act together regarding the holding of elections or face suspension, and they did so with less than a week to spare.

Mali have often punched above their weight, finishing third in 2012 and 2013 after twice eliminating the host nations, but did not get out of their group in the last two editions.

Verdict: Another side that will struggle to get beyond the second round

After decades being among the weakest African football nations, the largely desert northwestern country have reached the Cup of Nations for the first time.

National coach Corentin Martins attributes the change of fortunes to methodical planning with a second division and age-limit leagues down to under-13 being introduced.

"This will ensure there is plenty of talent to choose the various national teams from," said the French coach, who has overseen steady improvement in the national team over four years.

Asked to name his stars, Martins replied: "The team. Many of them are playing abroad and they have gained a lot of tactical and technical knowledge."

Verdict: Winning a match would be great; reaching the round-of-16 a fairytale

Giresse says the bottom line is reaching the quarter-finals as Tunisia prepare to make a record-extending 14th consecutive appearance at the tournament.

They became champions at home in 2004, finished runners-up to hosts South Africa in 1996 and were fourth in between. Six of the other campaigns ended in last-eight losses.

"I do not want to raise the bar too high and place unnecessary pressure on the players," cautioned Giresse. "So let us reach the quarter-finals and then adjust our targets."

Tunisia may lack a star like Egyptian Mohamed Salah or Senegalese Sadio Mane, but they boast an experienced side used to African combat and the conditions in Egypt will suit them.

Verdict: Could reach semi-finals, but not good enough to be champions

Doctors threaten strike from October 1 over arrears
33 minutes ago