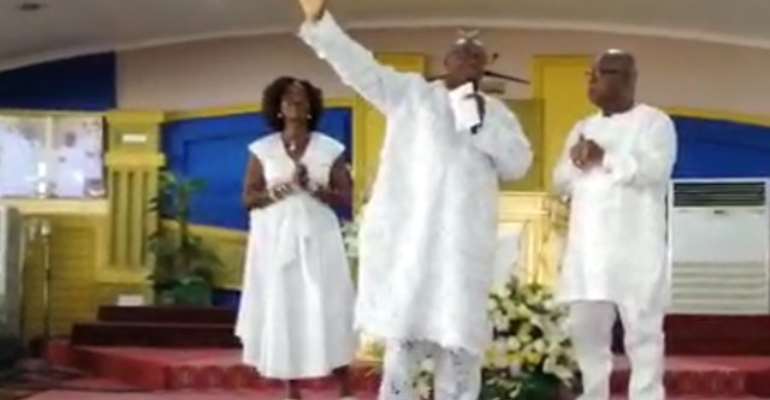 Ofosu Ampofo was at the Royal House Chapel International Sunday

Speaking briefly before making a cash donation to the Royal House Chapel International Mr Ofosu Ampofo revealed that he has been fervently seeking the face of God over his troubles.

Before his recent arrest and release, he grabbed national headlines when a leaked recording of a meeting of top NDC members hit the media on February 27.

In the audio, a voice alleged to be that of Mr Ofosu Ampofo is heard among other things scheming to kidnap political opponents.

“...Nobody has slept in his house. They even went to attack traders [and] some Imams had to come and plead for them. People will also start capturing your mothers and fathers and keeping them hostage until you show yourself up. So we need to go back quickly to the drawing board and strategise,” he laid out his plans to the audience alleged to be NDC communicators.

Mr Ofosu Ampofo is also standing trial for conspiracy to assault a public officer and conspiracy to cause harm over the leaked recording.

But at the Royal House Chapel International on Sunday, he revealed: “Recently I prayed and cried and I asked ‘God if you knew this was going to be my lot why did you allow me to win this election?’ But the Lord asked me to go back and read Exodus. And read what Moses went through. And he told me that the Egyptians that you see today tomorrow you will see them no more. Have the belief and confidence that the Almighty God that we serve will redeem me and his name will be glorified.”

He ended his brief speech at the Royal House Chapel International with a promise that the NDC will win the 2020 polls despite the party’s current challenges.

“As we journey into 2020, we have no strength to fight, we have not a weapon to fight but we believe that the Captain of Israel, our Lord Jesus Christ, will be the leader of our army and victory will surely be ours,” he prophesied.