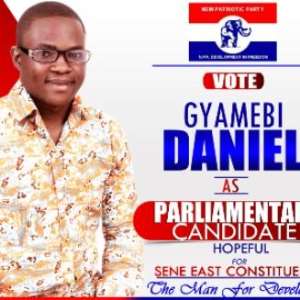 An appetent Member of Parliament for Sene East district in the very recently created Bono East region, Mr Daniel Gyamebi has lamented over some politicians who allegedly ignore populace in their constituencies after been voted to represent them in Parliament

According to him, some alleged MPs, CEOs and other people holding government offices neglect their people who once have offer help to them to achieve their political success which he stressed that taken such initiative render inhabitants inexplicable

He accepted that, he will forever remember his grassroots, residents and the general public but not disremember anyone when voted to power and added that he will make sure every individual in the Sene East District receive a fair share of the National cake

Mr Gyamebi prognosticated that he will use his manhood, money, and materials to ensure the district attain developmental achievement

He tasked Ghanaian citizenry to give moral, psychological, and physical support to Akuffo Addo led's government to act purposefully to bring about development in the Country