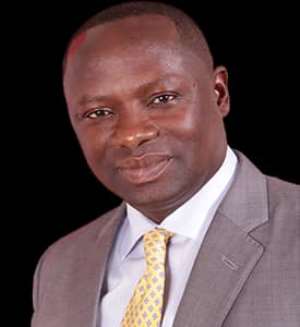 The NDC communication directorate in the Ellembele constituency has taken a swipe at a shadowy group called "Concerned Youth of Ellembele" for describing a recent research by the Political Science Department of the University of Ghana as “bias and fraud” after it ranked the sitting NDC MP, Hon Emmanuel Armah Kofi Buah, as the 5th best performing MP in Ghana today as bias and fraud.In statement signed by the Ellembele NDC constituency communication officer Kwesi Hanson,the communication team described the leader of the group,one Mankind as a known serial caller and an errand boy of the NPP regional treasurer so the falsehood in the release which sort to undermine the hard work of Hon Armah Kofi Buah is a clever tactic by their sponsor, Freddie Blay to cause disaffection for an obviously outstanding Member of Parliament in the hope of belittling his achievement and thereby whittle his popularity in the eyes of discerning Ellembele voters.

BY SHADOWY GROUP
The Ellembele Constituency Communication Directorate has taken note of a statement purportedly issued by a group calling itself “Concerned Youth of Ellembele”, in which it accuses the Political Science Department of the University of Ghana of “bias and fraud”, after it rankedthe sitting NDC MP, Hon Emmanuel Armah Kofi Buah, as the 5th best performing MP in Ghana today.

The statement, attributed to one “Mankind”, the leader of the group, said Hon Buah promised them “heaven” in the form of schools, portable water and jobs and also vouched to eliminate poverty in the constituency, but “not even a single initiative” has come from the MP since 2016. They are therefore asking the Department to justify the high ranking awarded to the MP.

To begin with, this shadowy group pretends to be a neutral local pressure group whose main concern is the development of Ellembele. Thereis no disputing the fact, however, that it is an NPP groupthat forms part of that party's propaganda machinery and it is being sponsored by Freddie Blay, current NPP National Chairman and former MPof the constituency who lost to Hon Buah in 2008.

Indeed, Mr. Mankind is a known serial caller who speaks for the NPP and the group's statement not only peddles falsehood, but it is a clever tactic by their sponsor, Freddie Blay to cause disaffection for an obviously outstanding Member of Parliament in the person of Hon Buah in the hope of belittlinghis achievement and thereby whittle his popularity in the eyes of discerning Ellembele voters.

The truth is, Freddie Blay is sponsoring the bid by a new female NPP candidate vying for the Ellembele parliamentary seat and he is wary of the daunting task he faces in his attempt to unseat a formidable opponent like Hon Buah. The rejection of the research findings is just part of his propagandist strategy aimed at watering down his achievements in order to boost the chances of the NPP candidate.

Mr. Blay is on record as the worst performing MP ever elected by the people of Ellembele, since the reintroduction of constitutional rule in 1992. He won the seat on the ticket of the CPP, even though he knew he was an NPP member who had been planted by the NPP to take advantage of Kwame Nkrumah's popularity in Ellembele to maintain the seat until it is time to take it for the NPP.

For three consecutive terms under Freddie Blay's watch, Ellembele saw absolutely no development. The only legacy he left was his own private residence at Eikwe, his hometown and to have changed the politics of Ellembele into a vindictive game, where youth in his fold were groomed to deceive the people, hate political opponents and disrespect accomplished individuals in the constituency.

Mr. Blay is known to be an extremely vindictive politician who is always seeking revenge against opponents and he saw that as a more satisfying mission than ensuring Ellembele received its fair share of development from the national kitty. His spirited denigration of Hon Buah's contribution to Ellembele development is motivated by nothing except acommitment to avenge for his 2008lossto Hon Buah.

As we speak, he is currently at war with his former errand boy and current sitting MCE, Hon Kaku Bonzo over a minor misunderstanding. Indeed, there is clear evidence that he is using his influence as National Chairman of the NPP to deny the constituency development projects and other initiatives,in an effort to undermine Mr. Bonzo and make him unpopular. That is Freddy Blayfor you.

The group is asking the University of Ghana Political Science Department “to come and show them what the MP has done from 2016 till date”. This call is far fetched, as we can offer help in that respect by enumerating visible projects and initiatives Hon. Buah has brought to Ellembele, from 2008 when Hon Buah was first elected as an MP, up until today, even though the NDC is no longer in power.

For lack of space, we would mention the most salient projects that were implemented under his tenure. These include classroom blocks he built for several communities,potable water and decent toilet facilities in places like Esiama and Aiyinase and scholarships and foreign sponsorship programs he instituted for needy students, including footing the bills of remedial students.

Of special mention is the road from Alabokazo to Atuabo, which passes right in front of Freddie Blay's private residence at Eikwe and which, incidentally,is the only “project” he implemented in the whole of Ellembele after 12 wasted years as an MP. This is an Nzema who is pretending to have the development of Ellembele at heart and is attempting to destroy the reputation of a hard working MP like Hon Buah!

The group says Hon Buah has not brought a single project to Ellembele “ever since Nana Akufo Addo took over as president of Ghana”. This statement is very instructive and the people of Ellembele must take note. The truth is, Akufo Addo's government is not interested in developing Ellembele, so it has stalled all projects, including those that were began by the NDC, and is blaming Hon Buah for it.

A typical example is the Esiama-Nkroful road, which the Chinese contractor was about to begin but was stopped by the NPP after it won the 2016 elections. As we speak, the road is in such a deplorable state and becomes impassable after every heavy rain. A couple of weeks ago, floods cut off the community of Nkroful. So where is the moral justification for the groupin blaming Hon Buah for “no roads”?

The Communication Directorate is by this statement entreating the people of Ellembele and Ghana in general to treat the accusations against Hon Buah with the contempt they deserve. The NPP is just playing the same game of lies that deceived Ghanaians into rejecting the NDC in 2016 and for which the country is currently suffering from extreme hardship, and an ominous state of insecurity.

Hon Buah has performed to the expectation of every discerning citizenof Ellembele and it is only mischievous detractors that would argue otherwise. It is not for nothing that he was voted the “Nzema Personality of the year” for 2018. He won it on merit. We entreat all Ellembele citizens to refuse to be tricked into believing the NPP's baseless accusations which are only motivated by mischief.

"I Took My COVID-19 To Some Registration Centres But I Was V...
32 minutes ago