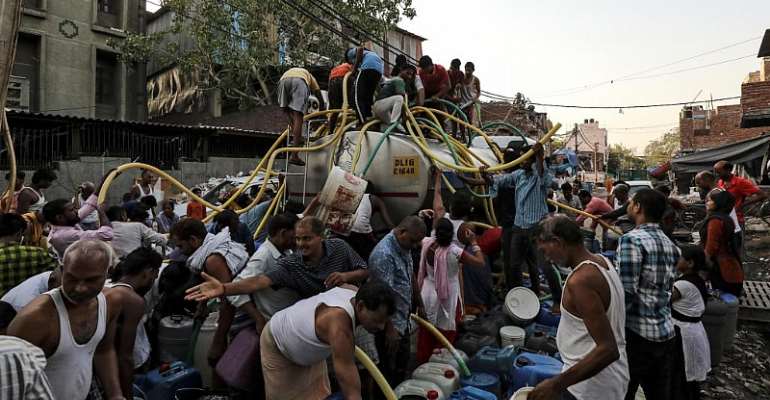 India's relentless heatwave has killed more than 40 people in the northern state of Bihar, where the authorities are grappling with an Acute Encephalitis Syndrome (AES) outbreak in Muzzafurpur city that has killed over 80 children in recent weeks.

Most of the heatwave deaths were reported from Aurangabad, Gaya and Nawada districts in the last two days while 60 more patients are being treated for sunstroke.

Residents of the state capital Patna wilted under blistering conditions, with the city's maximum temperature 9.2 degrees above normal. In Gaya, an infernal heatwave, known as a "loo" in the north, took the lives of 13 people.

“We have appealed to the residents to take adequate precaution against the heatwave and avoid being exposed in the sun for a prolonged period of time," Surendra Prasad Singh, a doctor at one of Aurangabad's state-run hospitals told RFI.

"An emergency meeting with hospital authorities have been called to take stock of the fast deteriorating situation.”

India is witnessing its worst heatwave this year with nearly 80 deaths reported across the country chiefly in the northern belt. At one point of time during the last month, over 10 places across the country recorded the hottest temperatures on the planet.

Encephalitis aggravated by heat
As the state authorities grapple with the deaths, Muzaffarpur, the fourth most populous city in Bihar, is reeling from a terrible bout of encephalitis, made worse with the extreme heat.

The death toll has risen with another 100 patients, mostly children, admitted in various hospitals and kept under observation.

Health minister Harsh Vardhan flew to Bihar to take stock of the situation and formed a central team that will review the surge in cases and assist the state in containment and control operations.

“Intense heat affects brain and leads to various health issues. The team has visited various hospitals to assess the situation and support the state government. We hope we can contain the spread," Vardhan told RFI.

Doctors claim that the deaths due to AES are being caused due to excessive heat and humidity.

Encephalitis is a viral disease, which causes mild flu-like symptoms such as high fever, convulsions and headaches and has been claiming lives in the district for the past few weeks. The vector borne disease is a mosquito-borne one caused by the Japanese encephalitis virus and spread primarily by the Culex mosquito.

“These heat conditions have created circumstances for the virus to spread and this has re-erupted again here raising serious concerns about its recurrent nature,” health secretary Sanjay Kumar told RFI.

The state health department in a press release said maximum deaths have occurred this year due to hypoglycemia resulting from high heat, humidity and no rain. The department has advised parents to not let their children play in open sun, or allow them to go to bed empty stomach.

The state of Bihar, particularly Muzaffarpur district, has been reporting cases of acute encephalitis among children since 1995. In 2011, there were 147 cases and 54 deaths in the district. In the following year, 469 cases and 178 deaths were reported from various health facilities.