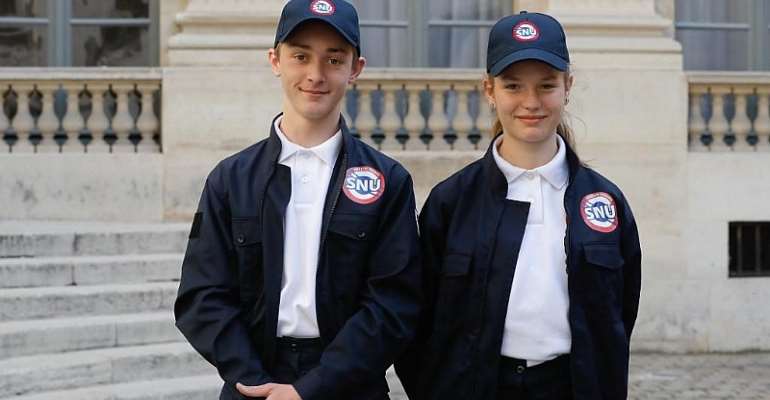 France has begun testing out a new national civic service (SNU), nearly two decades after it phased out conscription for men. Some 2,000 teenagers will learn first aid, how to read maps and other key skills as part of the trial.

President Emmanuel Macron caused surprise on the campaign trail in 2017 by promising to introduce a month-long compulsory national service, saying he wanted to give girls and boys "a direct experience of military life".

The proposal got a cool response from the army, which baulked at the prospect of having to put millions of teens through their paces, prompting the government to come back with proposals for a compulsory civic service instead.

Some 2,000 youngsters were chosen out of 4,000 volunteers for the first part of the trial, which start on Sunday at boarding schools, holiday villages and university campuses across the country.

For a fortnight, the 15 and 16-years-old will leave home for training in first aid and other basic skills, followed later by another two weeks of volunteering.

Described as an "integration phase", the teens will be taught first aid, map reading, and other skills.

A second two-week phase, later this summer or during the coming school year, involves work on a "collective project", such as volunteering with a charity or local government.

The programme, which will be written into the French Constitution, will be rolled out over the next seven years, targeting about 800,000 youngsters per year, eventually becoming compulsory.

France requires all citizens to participate in a one-day "Defence and Citizenship" course when they turn 18, which includes a presentation of the country's military forces and a French language test.

Macron is the first French president not to have been called up to serve, having come of age after the compulsory 10 months of military service for school-leaving men was abolished by ex-president Jacques Chirac in 1997.