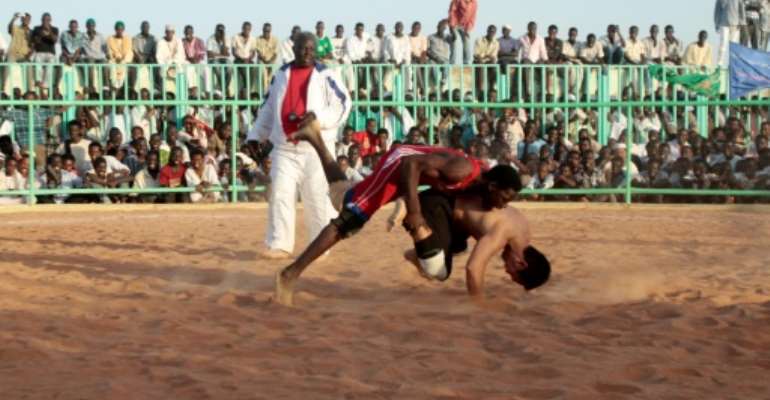 In this file photo from 2013, Japanese diplomat Yasuhiro Murotatsu, aka "Muro" (R) competes against Saleh Omar Bol Tia Kafi aka "al-Mudiriya" in a Nuba wrestling match in Khartoum. By ASHRAF SHAZLY (AFP/File)

Dramatic cheers and boos echoed through a spartan arena in Sudan's capital where hulking wrestlers went head-to-head once more, after a brief hiatus.

Captivating a sea of spectators, two of the wrestlers bowed forward before pouncing into one another, trading blows and tumbling to the sandy floor at the Haj Youssef stadium on the edge of Khartoum.

Originating in the Nuba mountains, the sport has become wildly popular country-wide in recent years.

"All the people present here come from all the [different] tribes of Sudan and they love wrestling," he added.

The sport was briefly put on hold after the violent dispersal of a sit-in outside army headquarters on June 3 by men in military fatigues, according to protesters.

But "over the past few days spectators started flowing back to the arena to watch wrestling matches again," said Altaib Deifallah, a wrestler who has in the game since 1993.

Protesters have been demanding Sudan's ruling generals hand over power to civilians after deposing autocrat Omar al-Bashir in early April.

Wrestling attracts hundreds of spectators to stadia -- some sat in chairs, others on the ground.

It is believed to be the most watched sport, after soccer.

In 2010, the Sudanese government brought the sport to the capital by building Haj Youssef stadium, which has hosted several matches starring international wrestlers.

Professionals from Japan faced off with their Sudanese counterparts in Khartoum in 2014.

A year earlier, a Japanese diplomat also joined a thrilling contest before losing the final bout.

"We have also participated in international tournaments including in South Korea, Japan, Niger, Egypt and Turkey," said Harba, a wrestler since 1997.

"Wrestling has long kept Sudanese people united -- it brings thousands to watch weekly and I am sure it will continue to bring more than any other sport," he said.