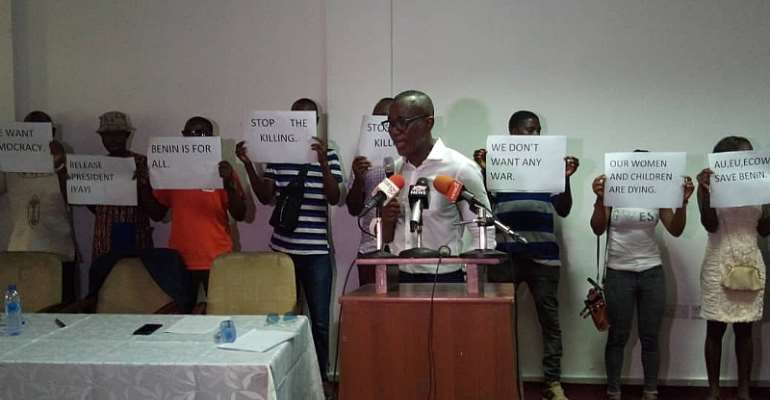 The Alliance for Sustainable Democracy in Africa (ASDA) has given the President of Benin, Patrice Talon, a 90-day ultimatum to relinquish power following the recent violence in the West Africa Country that has arisen from several protests on the back of their parliamentary elections a couple of months ago.

The West African country went to the polls last April to elect new parliamentarians in an election in which only two parties close to the government were able to present candidates. A wave of arbitrary arrests of political activists as well as journalists and the crackdown on peaceful protests has been described as a confirmation of President Talon’s autocratic rule.

Addressing a press conference in Accra, Ghana on Saturday, June 15, 2019, Chairman for ASDA Dr. Ladislas Prosper Agbesi emphatically stated that as much as they want President Talon out of government, they do not want any violence. They are therefore giving him a period of 90 days to peacefully step down as the leader of the country for a government of unity to take over.

“We have given President Talon 90 days to resign because we don’t want violence in our country. He must bow down peacefully and leave power for a government of unity and reconciliation for our country. We don’t want to fight”, he said.

Dr. Ladislas Prosper Agbesi who was a presidential candidate in the 2016 elections further shared that as it stands now, Benin does not have a parliament based on the fact that the polls that elected their MP’s were not legal.

“Today I want you to know that we don’t have a constitutional government because the people in the parliament are not legal people for our country. But I want to announce some good news for you, within 10 days the parliament will fall, the chairman of ASDA noted.

According to him, these are grave times not just for the Benin Republic and its people, but for the spread of democratic good governance, the rule of law, social justice, human rights and improved living standards around the worldwide community of nations and indeed all the people of the global village.

He believes the very concept of democratic rule is under assault in West Africa’s oldest ongoing democratic dispensation, from forces of autocracy and thinly disguised dictatorship and must be addressed immediately to liberate the people of Benin.

In line with that the group is calling on all heads of state in West Africa, the Economic Community of West Africa (ECOWAS), as well as the international community, to step in and help restore stability to Benin.

This is what Akufo-Addo and US Vice President Kamala Harris ...
46 minutes ago