Perennial Floods: We need big brains not only big drains. 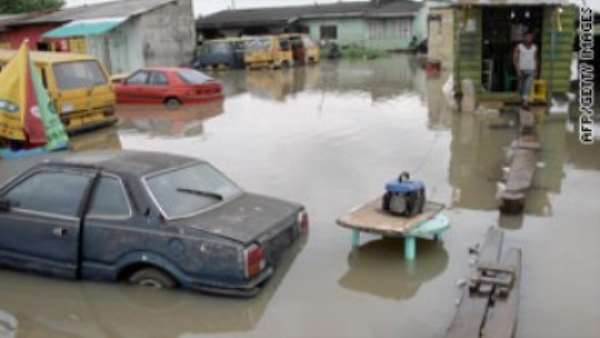 “We have to talk about our attitudes; the Odaw river is been dredged but people think the easiest way to deal with their waste is to dump into the river whenever it rains”- President Nana Akufo Addo.

I sometimes wonder if our dear Ghana still holds the accolade, ‘The Gateway to Africa’ after floods upon floods keep on killing citizens and rendering some homeless. A country that can boast of astute sons and daughters who are putting us on the world map but cannot curb floods, with all the technical brains occupying agencies mandated to curb it.

Some residents keep on blaming engineers for poor drainage systems, forgetting without a positive mindset, engineers can build much bigger drains than Odaw but our homes and roads will still get flooded because we wouldn’t mind dumping both liquid and solid wastes into the drains that will get choked within a year.

We’re making it look as if the Sanitation days organized every month, dredging of drains and constructing of new drains are all exercise in futility!

Here, we have big architectural brains that are mandated to regulate buildings and any other construction, that will end up being a nuisance and later cause us avoidable disaster. Currently, we’re seeing less of them aside the normal talk shop and media releases on why not people shouldn’t build in water ways.

Thanks to Mr. President, we have a dedicated ministry that oversees issues on sanitation, but we still see overflowing dustbins by our streets and homes, because the contracted private sanitation truck has either broken down or they complain of residents not paying. Some residents’ contract tricycle refuse collectors, who also dump it in big drains or water ways and at the end we all suffer the dire consequences.

The Pay As you Dump policy, coupled with timely removing of waste bins will also help save this indiscriminately littering.

Advocating for separation of waste should also be taken up by the sanitation agencies.

Some people who don’t want to use the brains God gave them for the betterment of the nation, are the reason why after every downpour, there’s a funeral in a household. Same people turn to blame governments for not dealing with the floods they themselves caused!

Ambasadaor Ashim Morton, Executive Director for WASH Africa recently led some leaders and residents of Nima, to dredge some drains in parts of Nima to ease the floods; and in less than a month, we’re seeing viral videos of some residents of Madina Zongo dumping huge solid waste into drains whiles it rains. Exactly what the President was lamenting over some few days ago.

In Takoradi alone, 5 young souls perished to the floods that brought their building down and it was due to choked uncovered drains, that got flooded and destroyed several houses which were illegally situated.

Statistics on flood deaths can go on and on but why must we be stabbing ourselves in the back whenever it rains?

Let’s also learn from the Chiefs and people of Assin Kushia,a town in the Central region, where littering is prohibited and culprits made to pacify the land with a male sheep to the Palace, making it one of the cleanest towns in Ghana!

As we call on the people of Ghana to be of good behavior and change their attitudes, we shouldn’t also forget to call on the Leadership of the country to crack the whip on the appointed big brains that are to make sure citizens abide by sanitation laws but are also sleeping on the job.

The fight against these perennial floods that continue to claim lives isn’t that of speeches and media releases but proper problem solving designs and a strong leadership that is ready face this menace with less human face.

It’s time we do away with the numerous speeches and walk the talk by ensuring citizens who litter indiscriminately from moving cars, dump waste into drains are arrested, prosecuted and sentenced to community service or made to pay huge fines, that will deter other recalcitrant residents from doing same.

Rwanda and Tanzania aren’t any better than Ghana; but sanitation laws, especially that of littering and usage of plastics are properly regulated and the results is why we yearn to visit these countries.

The writer is a Second Class Officer with the Ghana Prisons Service and can be contacted on [email protected] or 0249542342.