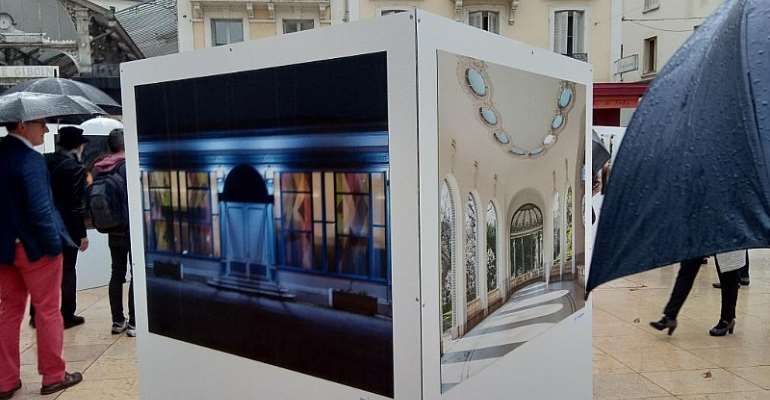 "The aim of Portrait(s) is to find a programme which is a real photographic journey," says Fany Dupechez, the seven-year old festival's artistic director.

This journey begins with the festival's poster image seen hundreds of miles away in Paris. It's a bust of a man, from Uganda, black and white and candid.

His anonymous story is told by Bastiaan Woudt.
A water firm called Marie-Stella-Maris commissioned the self-taught Dutch photographer to take a series of photos in three days in Uganda. Five photos would have been enough to satisfy the firm.

However, in that short space of time, Woudt took more than 100 black and white digital photos, with the help of a guide who took him to a fishing village and facilitated his meetings with the local people whom he photographed.

Not all would prove to be so easy, like the portrait of the unnamed man on the left of the photo above the "poster man".

“He didn't want to be photographed but then I took pictures of his brothers and then he was like, I think I want this too. He was so honest and pure. It's a powerful image because it's not strong, it's delicate.”

Woudt's photos were compiled in a book called 'Mukono' after the district where the village in Uganda lies. The proceeds go to helping build more drinking water facilities there.

Panoramic
Artistic director of Portrait(s) Fany Dupechez explains that even if the festival's budget is "one of the smallest of all the festivals in France today at 120,000 euros, 80 percent of which is footed by the municipality," she and her colleagues try to have enough exhibitions to be comprehensive.

This year, among the newer talents like Bastiaan Woudt are London-based Russian photographer Turkina Faso who has spent ten years photographing her waif-like sister Alice in poetic colours, in hip or fashion-photo mode.

Four of well-known photographer, South African Pieter Hugo's startling photos are part of a sound and image installation which draws visitors in to confront skin colour and how relative a notion it is, "we are all people of colour," says the artist commenting on his series of 2011-2012 called "There's a Place in Hell for Me and My Friends."

More documentary in style, late British photographer Trish Murta's series from the 1980s in the northeast of England, capture the stark reality of unemployed young people, left out of the tertiary boom that was taking place in other parts of Britain at the time.

Along the banks of one of Vichy's prominent features, the Allier River, black and white studio photos of extremely well-known actors taken by American Philip Halsman, break up the view of the trees on the opposite shore.

A good memory test and also amusing to see Halsman's portrait of British Prime Minister Winston Churchill appearing amid the gorgeousness of Hollywood.

Landscapes
Vichy is one of the eleven European spa or thermal towns vying for a place on the Unesco World Heritage List. The Portrait(s) Festival is a vector for showing off the historic town's better side.

Still remembered as the town where the World War Two Nazi collaborationalist government set up shop under a French World War One hero, Marshall Pétain, Vichy is hoping to move on.

Vichy's attractive Napoleon III architecture and baths, the river and playing host to international sports events like the Iron Man challenge, as well as festivals like Portrait(s) which is a mind-opening event show how keen locals are to get beyond that dark past.

Landscape photographer Ambroise Tézenas' produced a series of colour portraits of Vichy and its inhabitants.

"I am more a landscape photographer. But it's also taking a portrait of the city. As well as the significant historical buildings, I took photos of people who really live and work here. I met people from Kosovo who came here fifteen years ago and their children who were born here. Like this young man I met in the park. It was interesting to show this is a city of the 21st Century, not just a historical city"

All together now
Somehow the exhibition curated by Olivier Culmann pulls all these different strings together. '#Selfies: Ego/Egaux' is an exhibition of 24 series of selfies. Beyond the basic tourist tool for bypassing postcards, he reveals an artistic form in #Roofers, as well as campaign platforms, and some intriguing cases.

“It's important for me to understand that the selfie is not just an egocentric way of doing photography, it's also something that is more possible for everyone,” said Culmann about the personal results of his six months of research for the exhibition.

Every series has its own display format. He and his assistant curator, Jeanne Vigiué have, to give one example, made an Eiffel Tower-shaped arrangement of polaroid-size selfies taken off the internet of the thousands of people who photograph themselves each year in front of the Parisian monument.