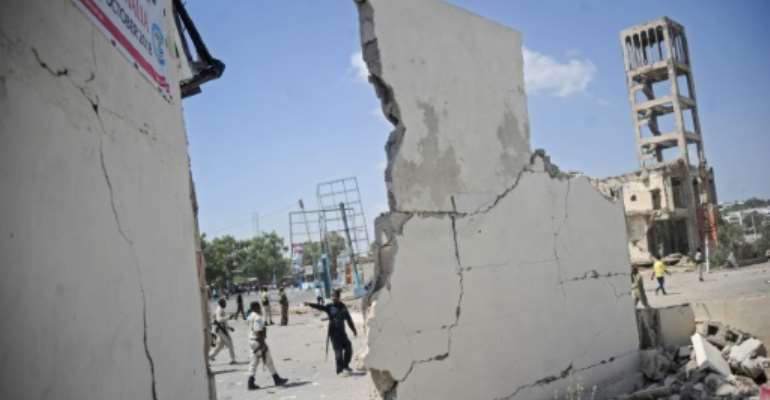 Al-Qaeda-linked Shabaab have been fighting for more than a decade to topple the Somali government and continue to wage a guerrilla war against the authorities. By Mohamed ABDIWAHAB (AFP)

"We have confirmed eight people killed and 16 others wounded in the blast," the private Aamin Ambulance service said.

A second blast on a key road leading to the airport of the Somali capital Mogadishu did not cause any casualties.

The Al-Shabaab group claimed responsibility for the attacks saying they were "they were targeting two checkpoints, one of them along the airport road and (the other) along the road that leads to house of legislators."

Abdulahi Mire, who witnessed the explosion near the parliament building said; ""I saw four dead bodies and four others wounded in the blast."

Police sealed off the road and ambulances rushed to the scene, he added.

Local shopkeeper Naimo Ali said the blast was "huge" and destroyed a part of her shop.

"I saw several people strewn in the road and some of them were motionless," she added.

According to security sources the second explosives-laden car a Toyota Noah, was spotted by security forces at a checkpoint. They opened fire and killed a man in the car, which then exploded.

No one was injured in the blast.

Al-Qaeda-linked Shabaab fighters have fought for more than a decade to topple the Somali government.

In 2011, they fled positions they once held in Mogadishu, and have since lost many strongholds.

But they retain control of large rural swathes of the country and continue to wage a guerrilla war against the authorities.

The revenge attack Friday just outside Galkayo -- one of the most developed cities in the centre of the country -- targeted the Rahanweyn clan, several of whose members are suspected of being Shabaab fighters.

"This was a horrible incident, a gruesome killing against nine unarmed innocent civilians in southern Galkayo. All of the civilians belong to one clan and the gunmen shot them dead in one location a few minutes after suspected Shabaab gunmen killed" a policeman, Mohamed Abdirahman, a local police official said.

"This is an unacceptable act and we will bring those perpetrators to justice," said Hussein Dini, a traditional elder.

"Their killing cannot be justified. It seems that the merciless gunmen were retaliating for the security official who they believe was killed by Al-Shabaab gunmen belonging to the clan of the victims."

Witnesses told local media the victims were rounded up from the streets or their homes and shot dead on the outskirts of Galkayo.

Local officials have in the past fingered the Rahanweyn clan for fomenting instability in the region and supplying fighters to the Shabaab.

The militia accused of staging the revenge attack are from the Saad Habargidir, a sub-clan of the Hawiye group which is dominant in the southern part of the city.

Galkayo, about 600 kilometres (380 miles) north of Mogadishu, straddles the frontier with the self-proclaimed autonomous regions of Puntland and Galmudug.

The city has been the scene of violent clashes between forces of the two regions in recent years and has also witnessed violence between the two rival clans occupying its northern and southern districts.

NDC Prepared And Sprayed Concoction On NPP Agents At A Regis...
3 minutes ago

Dozens Of Ivorians Arrested For Participating In Voters’ Reg...
11 minutes ago