Open letter to President Akufo-Addo over high rate of corruption' 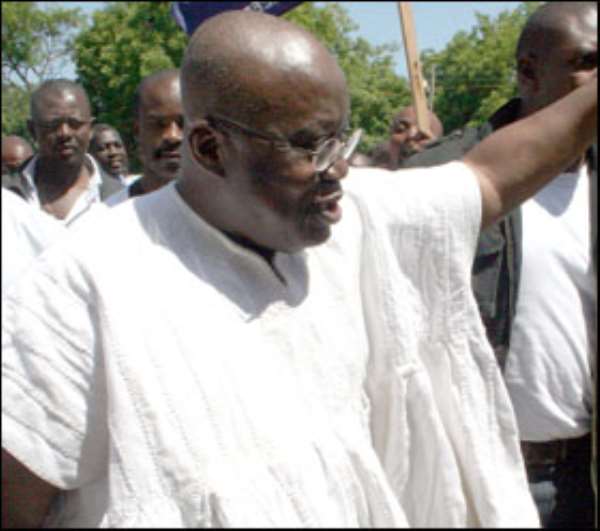 I hope this, my second letter, gets to you in safe hands since the first letter seems not to have been delivered to you. I assume those in charge of your letters may have thought it was actually meant for the Canadian High Commissioner to Ghana, and for that matter failed to deliver the letter to you but hopefully this one will get to you safely since it bears your name directly.

Over the years you have been a courageous ‘freedom fighter’ in Ghana. Even when the masses didn’t have a voice in those days, you bravely organized and led the biggest Kume Preko demonstration in 1995 together with brave hearts like Kwesi Pratt, Kweku Baako and others. You came to be liked by many Ghanaians and known as the ‘no nonsense man.’ Due to this, when you were seeking to be president of Ghana, some people within your own NPP party feared you would ‘shake up’ all the corruption and bad governance from Ghana and that many jail terms may be handed to some former corrupt appointees under ex-President Kufuor and Rawlings.

The inability of NDC leadership to aggressively fight corruption under John Mahama, made we the voters to give you power in 2016 with the hope of seeing some positive changes. However, Nana (as Captain Smart calls you on his show), with all due respect, you have failed Ghanaians. If any of your appointees tell you that you have performed, look him/her in the eye and fire the person. They are your enemies who are hiding the truth from you. Nana, get out of your comfortable Toyota V8 and take a tour of the markets in Accra like you used to do when you were in opposition. Ask our mothers in the market and they will bravely tell you the bitter truth that things are very hard in Ghana now. Three square-meals a day is becoming a major problem to many Ghanaians under your administration. The unpaid youth under NABCO are crying and the workers in the banking sector who have lost their jobs, are not left out in the cry.

Nana, things are falling apart and nothing seems to be working since you took over governance. People are literally hungry due to high food prices in our markets. Security in the country is very poor and planting for food program is also a total failure. The only thing flourishing under your watch is corruption and profligate spending by your appointees. Corruption is now worst in your government than we saw under ex-President John Mahama. Many thought John Mahama was deficient in the fight against corruption, for failing to act stiff on his appointees like Rawlings and Kuffour did. However, Nana and with all due respect, you are even more deficient and seems like a ceremonial president whilst the country is being govern anyhow by cabals comprising a de facto Prime minister and his gang of ‘Mafias.’ They dictate everything that happens in Ghana be it legal or illegal. All the bad precedences that are being witnessed under your administration today are caused by the gang of ‘Mafias’ at the jubilee house.

Nana if you don’t take in-charge of Ghana and bring back the former ‘Nana Addo’ in you, Ghanaians will have bad memories of your administration when you leave office. Mind you that, Ghanaians may not remember any of the names of the cabals/appointees that are ruining your legacy as a President. Only your name will be remembered for all the good and bad that are being witnessed under your administration. May I again remind you that many Ghanaians don’t even remember all the ministers/appointees who played key roles in the cassava initiatives, the free maternity and other social programs that were introduced by ex-president Kufuor. All the credit goes mainly to Kufuor and he is still being remembered for all his achievements. Same as your immediate predecessor. All the credit of infrastructural development under his administration goes to him and not his appointees who played key roles to see the roads and hospitals were constructed. Even as you have refused to commission some of the schools, hospitals and affordable housing projects that were built by him, Ghanaians can still physically see those projects dotted all across Ghana. Nana, do same too like John Mahama did and let Ghanaians remember you for massive infrastructural development. Don’t let your appointees and the ‘Mafias’ around you to sabotage your legacy. You can ask ex-President John Mahama and perhaps he will tell you if he had listened to Manasseh Azure and others and aggressively tackled corruption in his government, he wouldn’t have lost the 2016 election. Mr. President, listen to the voices on the ground who are living the everyday life of the ordinary Ghanaian and feeling the hardships in the economy, and not the voices around you at the jubilee house.

As a citizen and not a spectator, I end my letter here and dusting my voter ID card towards election 2020 like many other Ghanaians, In Shaa Allah.

We'll not accept the 4% salary increment — Coalition agains...
8 minutes ago