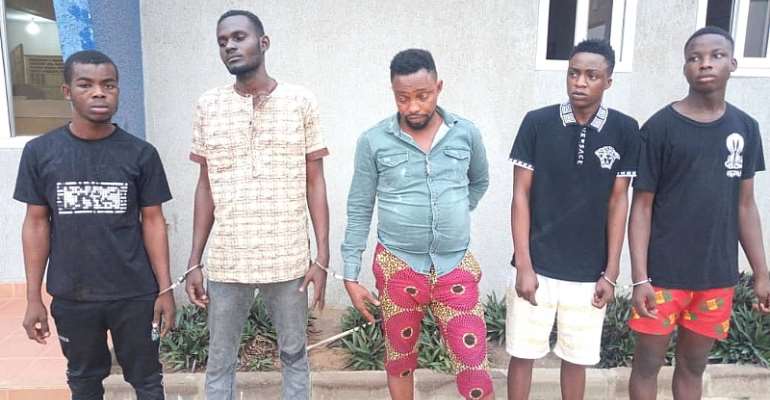 Five Nigerians who raped a woman during their robbery operation at Community 25 in Tema have been arrested by the Prampram Divisional Police Command.

The suspects were apprehended Friday after being on the police wanted list for some time.

Their modus operandi is attacking mobile money vendors, mostly women in their house with machetes and guns and raping them after taking away their valuables.

Confirming the incident to DGN Online, Chief Superintendent Cecilia Arko, Crime Officer of the Prampram Divisional Police Command, narrated that barely a month ago, four among the five suspects attacked a couple at their residence at about 3:00 am.

According to her, the suspects who were aiming at a mobile money vendor, mistakenly went to the house of the couple and held them hostage before demanding for money and valuables.

For the couple’s inability to provide what they wanted, Chief Superintendent Arko noted one of the suspects angrily sent their female victim to one of the rooms where he removed her underwear and forcibly hard sex with her while his accomplices filmed the odious act with a cell phone.

The Crime Officer indicated that last Thursday, the couple were walking in the neighbourhood when the female victim spotted the suspect who removed his mask before filming the act, adding that she quickly alerted the husband who confronted the suspect on the street.

However, according to her, the suspect decided to take to his heels upon seeing the couple but the male victim managed to raise alarm which attracted neighbours who apprehended the suspect and handed him over to the police station.

She further said when the suspect was interrogated, he admitted the offence and further led the police to their hideout in the area where his accomplices were also arrested including the gang leader who brought the suspects from Nigeria to Ghana to do criminal activities such as internet fraud and armed robbery.