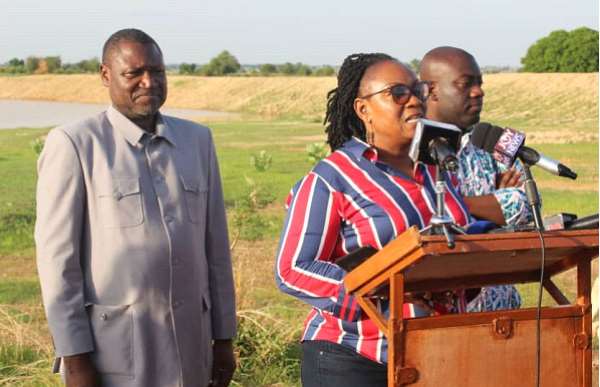 Mavis Hawa Koomson says after visiting some projects sites and based on reports from consultants, she is satisfied with the work done on majority of the dams constructed so far under the “One Village-One Dam (1V1D)” policy.

According to the Minister for Special Development Initiatives, per the briefing of the consultants and contractors, all the dams are yet to be completed with work done on these dams ranging from 75 to 90 per cent.

The remaining works to be done to hit the 100 per cent mark include the completion of some embankments, spillways, grassing of the back of the embankment and outlet to direct water to the farming area behind the dam.

Currently, 300 small dams have been awarded on contract and are being executed in selected areas in the five regions in the northern part of Ghana, with the cost of each small dam ranging from GH¢200,000 to GH¢250,000.

The minister reiterated that each constituency in the five regions in the northern part of Ghana is expected to get 10 small dams, thereby bringing the number of small dams to 570. However, due to some challenges in the implementation of the policy in the Tamale Central, the dams to be constructed by the end of 2020 have dropped to 560.

Before touring some dam sites in the Upper East Region, the Minister of Special Development Initiatives and Member of Parliament for Awutu Senya East had inspected some small dams in the Northern and North East regions.

“The dams cover a wide area and have a deep dugout inside to create room for extra water. There will be a committee to draw up plans for another round of community sensitization and also come out with other safety measures to prevent accidents that have been recorded in some areas where the small dams are being constructed,” she said.

The Minister for Special Development Initiatives was accompanied by the Minister of Information, Kojo Oppong Nkrumah, and the Chief Executive Officer of the Northern Development Authority, Dr. Abdul-Majeed Haroun.

The Information Minister urged the media to help in sensitizing the communities to restrain their children from swimming in the dam, and should not engage in reportage that incites the people of the beneficiary communities against the projects and government.

He also insisted that the dams have not been completed and the current state of the dams should not be reported as completed, because that will send a negative impression about the 1V1D policy.

The C.E.O of the Northern Development Authority, Dr. Abdul-Majeed Haroun, hinted that the authority has a plan to encourage farmers in the beneficiary areas to go into lucrative all-year-round farming once the small dams are completed.