Ecowas Calls For More Action On Restitution Of Looted Artefacts 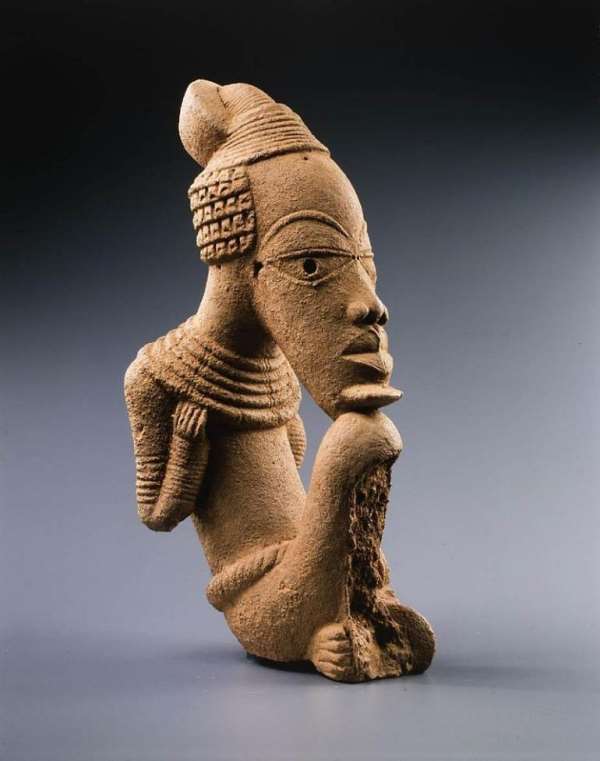 ‘It is indeed unfortunate that so much Nok material has been looted over time to supply the international market. Properly excavated, such pieces might have shed valuable light on the Nok culture’.

Very few regions of the world have been so systematically, intensively and thoroughly deprived of their artefacts as the West African region of our Continent. (2) This is where the Benin artefacts, Asante/Akan gold, Dogon sculptures, Baule masks, Nok sculptures, Ife sculptures etc. all came from. The savannah and forest areas all contributed to the flourishing of cultures which produced the famous artefacts that are now to be found mostly in Western museums and institutions. 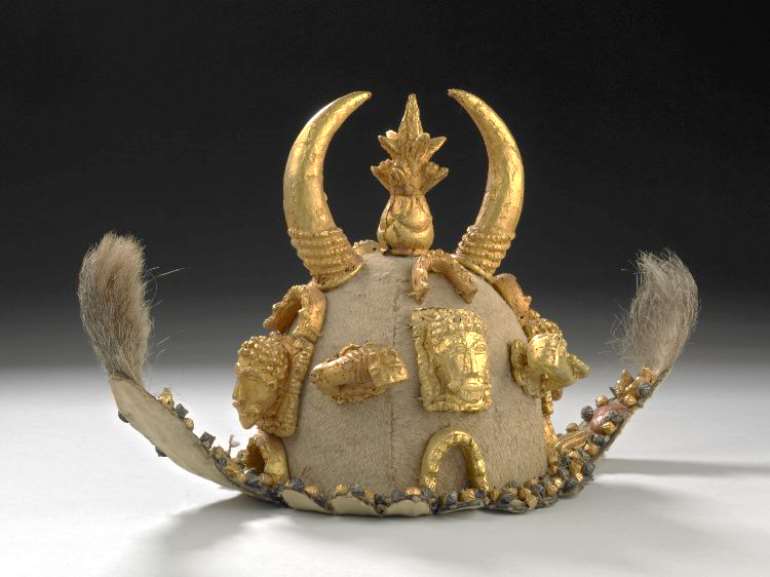 Felwine Sarr and Bénédicte Savoy in their report The Restitution of African Cultural Heritage. Toward a New Relational Ethics, commissioned by President Macron of France, state that Musée du Quai Branly Jacques Chirac alone has from this region the following number of artefacts (3) 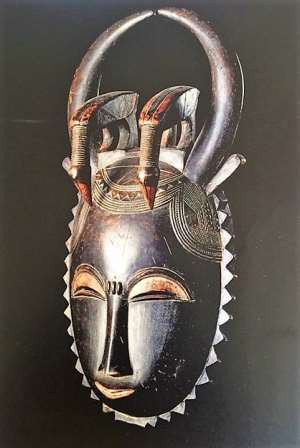 The British Museum, London, Ethnology Museum/Humboldt Forum, Berlin, and other Western institutions also have large quantities of West African artefacts. For example, the Humboldt Forum has at its disposal 580 Benin artefacts held previously by the Ethnology Museum, Berlin. It is true that the rich cultures of West Africa have produced an abundance of objects that astonish by their numbers, diversity and intricacies. But some 500 years of European looting, colonial exploitation, and relatively recent plundering with the connivance of some local inhabitants, have left the area with fewer remarkable artefacts than their production would seem to suggest.

The International Council of Museums (ICOM) has issued two red lists on West Africa to underline the need for safeguarding artefacts from this region. The latest ICOM Red LIST, A Red List of West African cultural objects at risk states: ‘Though protected by various national laws and international treaties, West African cultural objects are in high demand on the art and antiquities market and are thus at risk of being illegally traded. The recent conflict in Mali also highlighted the need for a new Red List for West Africa, particularly in light of the risks to manuscripts and of the looting of sites in the north of the country. ICOM therefore included in this Red List an “Emergency” section specifically dedicated to Mali’. (4) The document states in its introduction, ‘Throughout history, West Africa has suffered extensive losses of its cultural’ heritage’’. As most readers know by now, West Africa suffered its greatest loss of cultural artefacts during the colonial period when British, Dutch, French, German, and Portuguese regimes enabled the looting, stealing and transfer of African artefacts and other resources. Previous to this publication, ICOM had released a publication, Red List of Archaeological objects at risk, outlining artefacts that should under no circumstances leave Africa because of their archaeological importance for the writing of the history of the Continent, including Nok sculptures, Esie Stone statutes, terra cotta objects from the Niger River Valley, Burkina Faso, Niger, Togo, North of Ghana,( Komaland) and Côte d’Ivoire, terra cotta from Cameroon, Chad and Nigeria. (5)

Most readers will know by now that attempts at restitution have not been very successful. The Sarr- Savoy report has added urgency to the need for restitution.(6) But even now there is great reluctance on the part of the illegal Western holders to part with artefacts they have been holding for more than 100 years. Britain, the major holder of looted African artefacts, is not even willing to consider restitution but unashamedly proposes to loan temporarily the looted objects to the original owners. (7) The restitution movement requires all the support it can gather. It is therefore all the more welcome that ECOWAS (Economic Community of West African States) has added its voice in support of measures to ensure that at least some of the looted artefacts are returned to the original owners.

Among the various recommendations made by ECOWAS is that the Member States provide adequate financial resources for the implementation of the action plan on the return of cultural artefacts in their countries.’ It is important and obvious that nothing much can be achieved if States pass lofty resolutions and provide no financial and other means to attain the declared objectives. All African States proclaim their attachment to African cultures but a look at the budget provisions made for cultural institutions sometimes give the impression that our States are content with proclamations. We read in a recent article by Kwame Amoah Labi : ‘ In the early years of the Ghana National Commission, the government occasionally provided funding or guaranteed the support for fundraising abroad, as in the Carnegie Corporation example above. However, the government has not committed any financial support for the recent projects or their continuation, even if money was listed in annual budget proposals. This is the fundamental difference between these new collaborations and the earlier ones – the lack of significant support from the government and local agencies for home-grown initiatives. There is often a lukewarm response to proposals relating to museums and culture ,which has meant that our museums are unable to build upon previous projects using African funds.’ (8)

The lack of provision for financial resources makes our institutions very dependable on financial help from the very countries from which we seek to recover our looted artefacts. Many African bodies can hardly insist on restitution from Western countries on which they depend for assistance of all kinds. This becomes clear in the case of Nigeria that is seeking the restitution of the Benin artefacts but at the same time seeks the assistance of the holders of the artefacts in several ways.(9)

ECOWAS heads of State and Government are also urged to become ‘more involved and ensure the implementation of the action plan on the return of artefacts’. In this connection we would like to congratulate and praise President Talon of the Republic of Benin for his involvement in his country’s request for the restitution of the Dahomean artefacts that were looted by the French Army under General Dodds in the 1892 invasion of Dahomey. We were impressed by Talon’s speech at the UNESCO Conference 1 June2018: on Circulation of cultural property and shared heritage: What new perspectives?

Hopefully governments in the ECOWAS region will try to coordinate their policies. The impression one has at the moment is one of pursuing different policies at different speeds with different results. Thus, while the Republic of Benin will soon receive full restitution of artefacts from France, Nigeria is in the process of negotiating temporary loans of looted Nigerian artefacts from a group of European States and museums. (10) 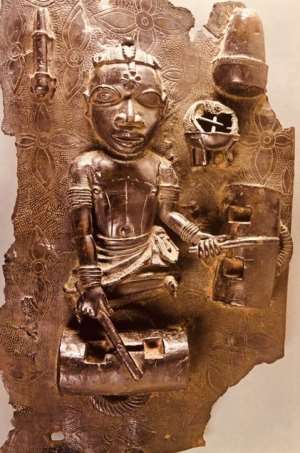 Gold gleams throughout the Ashanti story: one wonders in retrospect whether the punitive expedition would have been quite so dedicated if the major product of Ashanti had been anything else but the potent lure.” Russell Chamberlin. (11)

The ECOWAS text on return of cultural property is published below.

3. Savoy and Sarr, The Restitution of African Cultural Heritage restitutionreport2018.com/sarr_savoy_en.pdf

Culture Without Context, The Newsletter of the Illicit Antiquities Research Centre, Issue 6, Spring 2000.

8. K.A. Labi, ‘ New Considerations in Afro-European Cooperation in Africa’, in

10 .We Will Show You Looted Benin Bronzes but Will Not Give Them Back ...

11. Richard Chamberlin , Loot! The Heritage of Plunder, 1983, Thames and Hudson, London, p. 79. This is a book we can wholeheartedly recommend.

Cotonou, 12 April 2019. The meeting of Directors of Cultural Heritage and Museum of the Economic Community of West African States (ECOWAS) ended on 11 April 2019 in Cotonou, Benin with a number of recommendations for stakeholders. The stakeholders include African Union, ECOWAS Heads of State and Government, West African Economic and Monetary Union (UEMOA) and Member States. Member States were requested to take measures to ratify the UNIDROIT Convention as soon as possible, prepare official letters to countries in possession of these artefacts to return them, inform and raise awareness in order to mobilise national stakeholders. They were also urged to provide adequate financial resources for the implementation of the action plan on the return of cultural artefacts in their countries, promote the introduction of legal instruments for creating business foundations by non-state actors in order to support funding of activities for returning cultural heritage and adopt a common position for nominating ECOWAS representatives in international decision-making bodies on culture. The African Union on its part, was recommended to take ownership of ECOWAS action plan on the return of cultural artefacts and contribute to its implementation. As regards the Heads of State and Government, participants recommended that they become more involved and ensure the implementation of the action plan on the return of artefacts and the establishment of a group devoted to cultural artefacts. ECOWAS and UEMOA, on their part, were invited to prepare a draft international agreement on the specific issue of the return of cultural artefacts and establish a regional committee for monitoring the implementation of the action plan. The meeting also urged them to organise an international conference on the return of cultural artefacts in order to inform, sensitise and mobilise all stakeholders, strengthen cooperation with professional organisations, particularly the International Council of Museum (ICOM) and mobilise the necessary financial resources for the implementation of the action plan on the return of cultural artefacts. At the end of the meeting, the participants validated the ECOWAS 2019/2023 Action Plan for returning cultural artefacts to their countries of origin and recommended its adoption by the meeting of Ministers of Culture of the region. The ECOWAS Commissioner for Education, Science and Culture, Prof. Leopoldo Amado expressed satisfaction on the completion of the document, which was commissioned by the Heads of State and Government. He commended the general enthusiasm and determination the return of artefacts to their countries of origin have generated, while underlining the problems and challenges inherent in the return of cultural artefacts. ‘We are going to present the status of our cultural property and succeed in returning them to our respective countries. We should sensitise our people on the importance of these items, and work towards enlisting their support to ensure our development and cultural welfare’, declared Prof Leopoldo Amado. Speaking during the closing ceremony, the Director of Cultural Heritage, Mrs Carole Borna, representing Benin Minister of Tourism, Culture and Sports commended the participants for the relevant recommendations made. She expressed the hope that these recommendations would be adopted at the next meeting of ECOWAS Ministers of Culture, and concrete actions taken for the return of African cultural artefacts to their counties of origin. 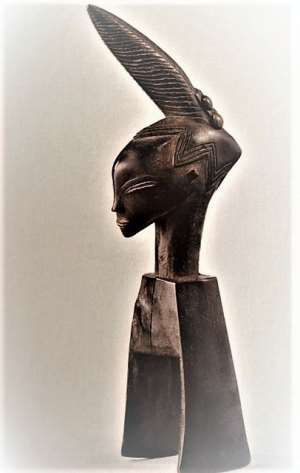