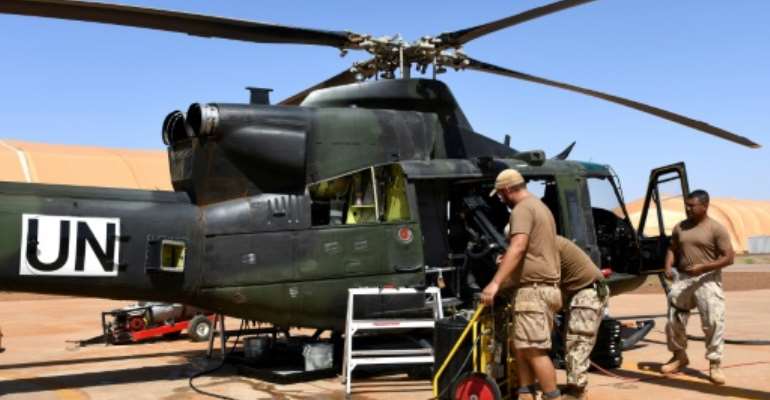 Some 250 Canadian personnel and eight helicopters were part of the country's peacekeeping contingent in Mali -- this shot was taken in Gao in August 2018. By SEYLLOU (AFP/File)

Canadian personnel participating in the UN peacekeeping force in Mali will remain in place until the end of August, a month longer than planned, to ensure a smooth transition, the government said Friday.

The Canadians, who were providing medevac services as well as logistics and supply transport support, will stay until a Romanian helicopter unit is in place, the foreign ministry said.

During the month of August, Canadian forces will only perform medical evacuation tasks, it said.

The Canadian peacekeepers, who have been deployed in Gao in the north of the violence-wracked country since July 2018 as part of the UN force known as MINUSMA, were to leave at the end of July.

In late January, Romania agreed to relieve the Canadian forces -- a contingent of about 250 personnel and eight helicopters.

MINUSMA was established in April 2013, after radical Islamist militias seized the north of the country the year before, only to be pushed back by French troops.

The force of 15,000 soldiers and police is considered to be one of the most dangerous peace missions run by the United Nations, with 195 fatalities.