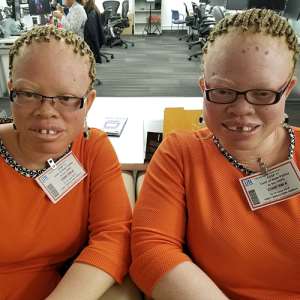 Member of Parliament for Krachi-Nchumuru, Hon John MAJISI has appealed to government through the Ministries of Employment and Labour Relation, and Gender, Children and Social to help streamline the needs of persons with albinism (PWA).

According to him, persons with albinism have the right to life and security protection as well as the right not to be subjected to torture and ill-treatment.

He said persons with albinism have been subjected to discrimination again their rights to quality education, access to good healthcare services, among others in the country.

This, he said, the two Ministries in a joined education and awareness-raising campaigns could help combat superstitious and stigma associated with albinism.

Mr Majisi made the appeal in a statement on the floor of Parliament on the occasion of the celebration of the International Albinism Awareness Day (IAAD), which fell on June 13, every year.

The International Albinism Awareness Day had been proclaimed by the United Nations (UN) to help spread information about albinism.

The theme for this year’s celebration is: “Still Standing Strong" which the Krachi/Nchumuru lawmaker said, Ghanaians and for that matter, the government have a moral and constitutional responsibility over PWA .

Persons with albinism are born with a congenital condition characterised by the complete or partial absence of melanin, the pigment that gives colour to the skin, hair and eyes. Other says is a medical condition but non-contagious and occurs in all racial and ethnic groups across the world.

Nevertheless, Mr Majisi called for the implementation of the Africa sub Regional five years Action Plan on Albinism ( 2017 to 2021) to address the increasing levels of violent attacks and related human rights violation against persons with albinism in Sub Saharan Africa with Ghana leading the way.

He noted that the worst expression of discrimination against persons with albinism is dehumanization, "which lays the foundation for horrifying physical attacks against them," pointing out that, these happened because many people believed that they are magical beings or ghosts, they mutilate or even kill them so their body parts could be used for witchcraft rituals.

While rallying his colleague MPs through the Parliamentary Committee on Social Welfare to collaborate with the Ghana Association of Persons with Albinism (GAPA) to create awareness about Albinism especially in communities where their cultural and traditional beliefs posed a threat, he also charged GAPA to as a matter of concern extend their activities including the formation of the branches nationwide.

In his view, it would go a long way to ensure that their educational, awareness and empowerment activities reach larger population of persons with albinism.

Contributing to the statement, Dr Bernard Okoe Boye, MP for Ledzokuku, said albinism is a medical condition which is in every human being as generic cell but only that some owners aren't exposed as to the persons with albinism and called for total support for persons with albinism, describing them as "minority group who need everyone help."

According to Dr Oko Boye, most persons with albinism were depressed simply because the general society regarded them as strange human beings and as such there should be education and awareness for the public.

He reiterated his calls for affirmative action for persons with albinism by registering them freely onto the National Health Insurance Scheme (NHIS) and as well assist them access to quality education as some appear more intelligent than those without albinism.