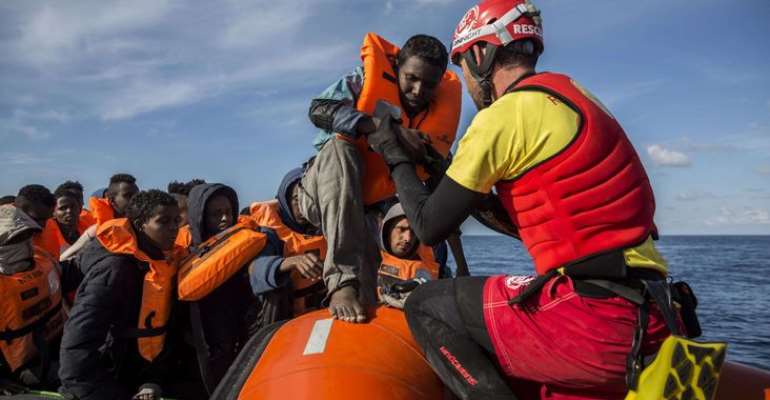 Remittances from international migrant workers to their families are expected to rise to over US$550 billion in 2019, up some $20 billion from $529 billion last year, Gilbert F. Houngbo, President of the International Fund for Agricultural Development (IFAD), stated today.

In a message released on the occasion of the United Nations' International Day of Family Remittances (IDFR), observed each 16 June, Houngbo noted that the money sent home by the world's 200 million migrant workers adds up to more than three times the level of official development assistance (ODA) and surpasses foreign direct investment (FDI). An impressive figure given that it corresponds to only 15 per cent of migrant workers’ earnings, with 85 per cent remaining in host countries.

"Behind the numbers are the individual remittances of $200 or $300 that migrants send home regularly so that their 800 million family members can meet immediate needs and build a better future back home. Half of these flows are sent to rural areas, where they count the most,” Houngbo said.

If current trends continue, it is projected that $8.5 trillion will be transferred to families in developing countries over the 15-year life of the 2030 Agenda for Sustainable Development. By then, it is estimated that over $2 trillion (on average 25 per cent of remittances received) will have been saved or invested. If leveraged effectively, remittances can have an unprecedented multiplier effect on sustainable development.

"Governments, regulators and the private sector have an important role to play in leveraging the effects of these flows and, in so doing, helping nearly one billion people to reach their own sustainable development goals by 2030," Houngbo added.

With half of all flows going to rural areas in developing countries, IFAD has long been committed to working to make the development impact of remittances even greater. The crucial contribution of migrant workers has also been recognized in the Global Compact for Safe, Orderly and Regular Migration, adopted in December 2018.

Remittances are private funds transferred through private channels and are of increasing interest to the private sector, both as a business opportunity and as a tool for development. Global efforts have been underway to bring transfer costs closer to the 3 per cent target identified in SDG 10.

Linking these flows with financial services and, in the process, bringing millions of people into the financial sector, remains one of the greatest development opportunities that remittances offer.

"Over the past decade, IFAD has invested in over 40 countries, supporting more than 60 projects aimed at leveraging the development impact of remittances for families and communities,” said Paul Winters, IFAD Associate Vice-President, speaking at an event held today at UN Headquarters in New York recognizing the international day and its #FamilyRemittances2030 campaign.

"Providing better access to remittances and better use to families through rural financial institutions has had a positive impact in rural areas by bringing many unbanked recipients into the formal financial sector. Thanks to this inclusive effect, families can now collaterize remittances and access financial products, such as savings, credit, and insurance," he added.

"In fact, it is fair to say that, in poor rural areas, remittances can help to make migration a choice rather than a necessity for so many young people and for future generations."