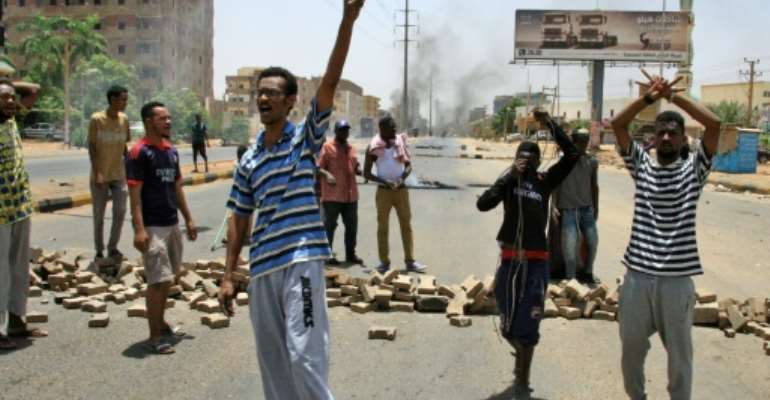 Sudanese protesters gesture and chant slogans outside Khartoum's army headquarters on June 3, 2019 after security forces broke up a weeks-long sit-in, prompting the US to call for an "independent and credible" investigation into the crackdown. By Ebrahim Hamid (AFP/File)

A US envoy for Africa on Friday called for an "independent and credible" investigation into last week's crackdown on protesters in Sudan that left dozens of dead.

"The USA believe very strongly there has to be an investigation which is independent and credible which will hold accountable those committing the egregious events," Tibor Nagy, the assistant secretary of state for Africa, said from Addis Ababa after a two-day visit to Khartoum.

Thousands of protesters who had camped outside the army headquarters in central Khartoum for weeks were dispersed on June 3.

According to doctors linked to the protest movement, 120 people died and hundreds were wounded, while Sudan's health ministry put the death toll at 61.

Nagy said the crackdown marked a brutal reversal in a situation that had generated much hope.

"The events of June 3rd constituted, in our point of view, a 180-degree turn in the way events were going, with murder, rape, by members of the security forces," he said in a conference call with journalists.

"Until June 3rd, everybody was so optimistic. Events were moving forward in such a favourable direction after 35 years of tragedy for Sudan".

Mahdi's elected government was toppled in 1989, in an Islamist-backed coup led by Omar al-Bashir.

After three decades in power, Bashir was himself ousted in April following mass protests, backed by Mahdi.

Bashir was replaced by a military council, but protesters carried on with a sit-in outside Khartoum military headquarters to demand a transition to civilian rule.

On Thursday, a spokesman for the military council expressed "regret" over the events of June 3, saying the plan had been to clear an area close to the sit-in but "excesses happened".

The council rejected an international investigation, saying it was carrying out its own probe, whose findings would be released on Saturday.