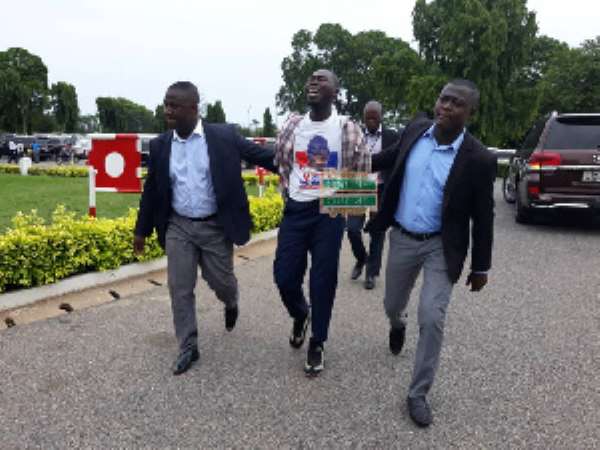 The leadership of the ruling New Patriotic Party (NPP) in the Kwesimintsim of the Western Region has rejected Kojo Mensah who attempted to commit suicide in Parliament as a party member.

The 35-year old Kojo Mensah on Thursday, June 14, 2019 was arrested by the Ghana Police for attempting to kill himself in the chamber of Parliment over 'economic hardship'.

Kojo Mensah was able to enter the public gallery as a guest carrying on him a rope which he tied around a chair threatening to jump from the first floor to his death.

It took the intervention of the Police who were in plain cloth to apprehend and save the situation while sitting was ongoing.

Upon his arrest, the man was heard crying and shouting that “I want to talk to His Excellency Nana Akufo-Addo”.

He also shouted "I want to talk to my MP Hon. Joseph Mensah".

Kojo Mensah who according to him, comes from Kwesimintsim Constituency was in Parliment to look for the MP for the area.

Speaking to the media after the incident, the Acting Director of Public Affairs at Parliament, Kate Addo disclosed that Kojo Mensah went to Nigeria and unfortunately for him, he was attacked by armed robbers so he came to Parliament to look for Hon. Joseph Mensah (MP) for financial support.

Kate Addo said the MP was not in Parliment on that particular day.

Commander of the Parliamentary Protection Unit, Supt Freeman Tetteh, briefing the media said the case has been referred to the Ministries’ Police Station for investigations.

But speaking to the media in Western Region, the NPP Constituency Secretary of Kwesimintsim, Mr. Appiah Kubi opined that Kojo Mensah who attempted to take his life is not an NPP member.

He added that Kojo Mensah is not even from the Constituency.

He said it was a plan thing to make their MP unpopular.

"I want to state it clearly that this Kojo Mensah is not an NPP member, his name is not in our register, he is not even this Constituency, we don't know him anywhere within the Constituency. He was in Parliment to tarnish the image of our MP, it is was a plan thing. But we have sent a delegation to go to Accra to investigate him well because he is not an NPP member, " the group stated.

The Member of Parliament for Manhyia North and Vice Chairman of the Defence and Interior Committee, Collins Owusu Amankwaa described the situation as very unfortunate and called for investigations into the matter.

He suspects that it was a well thought out plan “just to tarnish the image of Parliament”.

“We need to find out what transpired and must say that what happened is very unfortunate. What he demonstrated must not be entertained. We must probe this matter”, he said.

Per the rules of Parliament, nobody is permitted to wear any party paraphernalia to the chamber where government and private members’ business are carried out, according to the group.