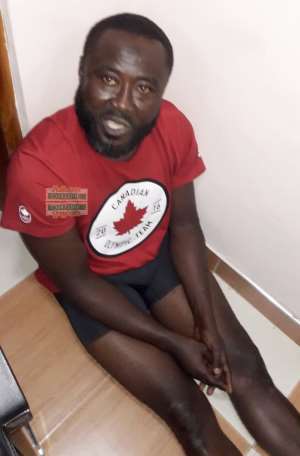 A desperate attempt by the opposition National Democratic Congress (NDC) to link Seidu Yakubu also known as ‘MBA’, a suspected kidnapper in Kumasi, with some New Patriotic Party (NPP) gurus, has woefully failed.

At a hurriedly arranged press conference in Kumasi on Thursday, Abass Nurudeen, the Ashanti Regional NDC Communications Officer, alleged that Seidu was staunch NPP member, without producing any evidence.

He also alleged that Seidu was the lackey of Dr. Matthew Opoku Prempeh popularly known as ‘Napo’, the Manhyia South MP and Bernard Antwi Boasiako also known as ‘Wontumi’, the Ashanti Regional NPP chairman, which has been found to be false.

Interestingly, the NDC Ashanti Regional Communications Director for the largest opposition political party, who was not feeling comfortable in his chair, failed to back his wild allegations with hard evidence.

Abass Nurudeen, who was clearly in a lying mission, also alleged that Seidu was a friend of the MCE for Asokore Mampong, Alhaji Alidu Seidu, but again he failed to provide any evidence to that effect.

Again, the NDC man, who was trying hard to link Seidu with the NPP, claimed that Seidu was a member of the NPP at the Asawase Constituency, but yet again he only said that without any concrete evidence.

As if not enough, Abass Nurudeen, who sounded like he has been coached by his pay masters to defame some NPP gurus, alleged that Seidu was a prominent member of Delta Force, a disbanded vigilante group of the NPP.

Seidu’s Arrest
Seidu and 13 other suspects were arrested by operatives of the National Security, BNI and the police during an operation at Achiase near Antoa, where the two Canadian captives were freed on Wednesday.

NDC Chairman’s Link
The National Chairman of the NDC, Ofosu Ampofo, is currently facing the law for his alleged kidnapping comments. Reported cases of kidnapping started to occur in the country after his weird inciting comments.

NDC Jumps the Gun
Surprisingly, before the police would come out with their official stance on the arrested kidnappers, the Ashanti Regional NDC, for reasons best known to them, jumped the gun with a hurriedly arranged press conference.

Abass Nurudeen, addressing the media, insisted that Ofosu Ampofo was not behind the spate of kidnappings in the country and so the charges against him should be dropped by the security agencies.

Sarcastically, he said Napo and Wontumi, who have not incited anybody to carry out kidnappings to create panic in the country, should be blamed for the kidnapping of the two Canadians.

Checks
Meanwhile, thorough checks made by Daily Guide newspaper has revealed that Seidu has nothing to do with the NPP in the Ashanti region as Abass Nurudeen tried hard to paint but to no avail.

Also, Seidu has never associated himself with Napo or Wontumi either privately or publicly. In fact, Seidu is not a member of the NPP so it is not possible for him to be the lackey of Napo or Wontumi as Nurudeen alleged.

Seidu’s NDC Links Exposed
Significantly, the paper’s checks rather revealed that Seidu was a proud member of the NDC and he has openly declared his staunch support for the largest opposition political party at several public functions.

Seidu, the paper also realized, usually act as one of the bodyguards of former President John Dramani Mahama and his family, whenever the NDC flag bearer for the 2020 elections, had visited Kumasi.

It is therefore interesting as the NDC are now trying with all their might to link Seidu with the NPP and some of its leading members, especially Napo, who is law-abiding and highly respected politician in the country.

Political Pundits
In a related development, some political pundits in Kumasi have slammed the NDC for still sticking to their usual propagandist politics, which led to the embarrassing political defeat that the NDC suffered in 2016.

According to the political connoisseurs, who doesn’t want their identities to be declared, the NDC should indulge in politics of ideas and policies if they want to win power again and stop the politics of blatant lies.