Western Nigeria On The Verge Of Submission Or Secession 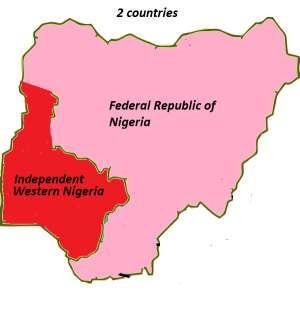 Kidnapping for ransom with impunity and ethnic suzerainty has divided brothers and sisters into different hamlets and villages turning their Chiefs, Emir or Igwe into President of nations. People are calling for regional police to check incessant deadly assaults across state lines. We already have Sharia Police, so regional police cannot be a big deal. Indeed, Nigeria used to have Special Constables locally years back.

Yet, if left on left on their own, states cannot generate enough revenue to sustain their police and pay workers within. Imagine local police without pay. Right now, some states have not paid government workers for months. While everyone runs to Abuja to collect their share of foreign oil income from the homes of poor fishermen and farmers: remain environmental disaster dump. No matter who the Presidents are. This is a lesson to all.

However, the bleeding, looting, the corruption of thoughts and thoughtless conspicuous extravaganza have destroyed the moral fiber of the Country including the West. There is no way these outlandish senseless corruption can escape even the most decent folks gasping for moral courage. Western Nigeria has been backed into a corner, attacked from all sides; to the point where they have to defend notorious leaders and their vigilantes for no other reason than to send their own fire to fight fire!

Go West Young Man Go West was a popular phrase used as far back as 1851 in the United States urging young people looking for opportunities to go West. Before that same time, the Western Nigeria was booming from Ilesha to Lagos where locals and returning freed slaves from Europe and the Americas traded in foreign, local goods and services. Ibadan has never gotten enough credit for its prowess, nor had Ijebu traders. First foreign schools were established by Christians: Wesleyan Methodist Primary in 1843 and CMS Secondary in 1859. Muslim schools came later but each family has both

There were many firsts too many to mention from engineers, iron workers, plumbers, carpenters that built Lagos Brazilian quarters, Iju Water Works, churches, mosques, roads gutters and boats used not only for recreation but for serious business of fishermen. Complimenting these strategic professions on other lanes were the first lawyers, doctors, teachers and accountants under their father’s or their own “Petesi”. They traded gold, silver, exotic materials of damask and aso-Matin.

Aso-Matin and damask were worn by the rich and famous. One of the most famous traders that imported Aso-Matin also had the main street named after him right in the middle of Lagos - Martins Street. Three Lagosians’ tombstones were moved close to one another to make way for the widening of the streets at Ita Akani. They were Ogun Ojo Martins, Taiwo Olowo, Dr. Akiola Maja around Breadfruit Street at Garber Square.

During the 18th and 19th centuries when the British were dispossessing the natives of their land by vesting their control in the hand and mercy of the Queen of England. Chief Oluwa Amodu Tijani, one of the prominent sons of Awori fought them all the way to the highest Court in England represented by no other than Herbert Macauley and won in 1921. The significant of Tijani courage cannot be lost as the pioneer of assertion of land rights to native land-owners throughout Africa.

Though Bishop Ajayi Crowther, born in 1809 was captured as a child slave, the ship got intercepted by the Abolitionists on the high seas and returned back to shore. His education at Oxford and Fourah Bay College benefitted many Africans from Sierra Leone to Cameroon in West Africa. He was mostly known for translating the Bible from English to Yoruba, Igbo and other local languages where he served as Christian clergy.

This background history established the foundation of Nigeria today and explain the reason Western Region stands as a pioneering foundation for the modernization of Nigeria. It was not by accident, but by hard work, selflessness and the understanding that one individual must not rest until he takes his people along in the successful pursuit of political independence, economic salvation and psychosocial happiness of most.

If we do not know where we are going, let us think about where we were coming from. The individual sacrifices made by our regional fathers from Herbert Macaulay, Ekoli, Azikiwe, Awolowo, Ahmadu Bello and Aminu Kano must never be forgotten in a country so rich in history and formidable activists. Like most countries, our country has many problems but we compounded it with the curse of oil income that reduces us to the poverty capital of the world.

Though Lagos, Ijebu and Abeokuta became the germination ground for progress, the Country would not have survived without the backing of towns and villages throughout Nigeria that supported their sons and daughters during the time of struggle for political survival before they finally obtain Independence. We must not forget that these were babies just out of colleges and universities forming Youth Movement in their 20s.

The notion that the West has finally had enough of Nigeria may be chilling to some of our collective memories because of its strategic historical roles. It was a fertile ground not only for Nigerians but for Africans; many of who went back home, like Nelson Mandela, telling their folks about their formative years in Western Nigeria of their days.

Western Nigeria is now preparing its citizens for deadly attacks and those trying to usurp their land from North, South and Center. They are not giving up an inch of land to anyone or soul, no matter where they come from. They want the West so badly as if their survival in this world depend on it. Otherwise break Nigeria into pieces to recapture it piece by piece. Sorry, the West is neither on the auction block nor rolling over for roaming scavengers.

The irony of all these, is that no other region accommodate and tolerated strangers within them than the West. No other region extend such accommodation or tolerance for others or even their own neighbors. It has got to a point where many people are suggesting curtailment or outright cut back of privileges if it is not appreciated or if it is just taken for granted in the West. It is where many people hide from their own people and visit home states unnoticed. It does not make the West the refugee region.

Unfortunately, migration, environment and politics have divided people that were the same early in the early centuries into tribes and ethnic groups. Sadly to the point where “my People Are Killing My People” within Itsekiri, Urhobo and Ijaw. Everyone wants to be the tribal President in his village or town making their place impenetrable for their neighbors. The only place that welcomed strangers within them are abused in their own land.