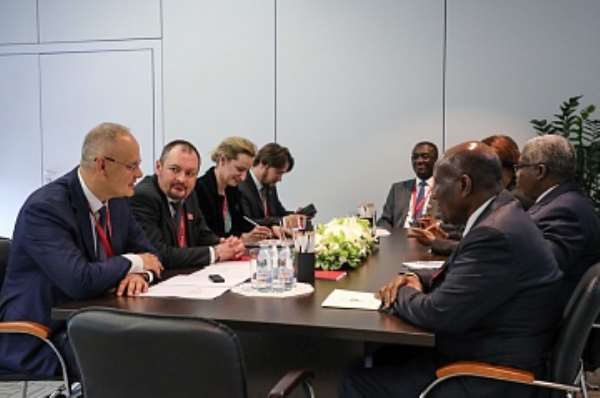 On the sidelines of the St. Petersburg International Economic Forum (SPIEF-19), the Adviser to the President of the Russian Federation, Anton Kobyakov, held bilateral meeting with Vice-President of the Republic of Cote d’Ivoire, Daniel Kablan Duncan.

The key item on the meeting agenda was the upcoming Russia–Africa Summit, which will be held on October 24 in Sochi under the co-chairmanship of President of the Russian Federation Vladimir Putin and President of the Arab Republic of Egypt Abdel Fattah el-Sisi, who also hold rotating Chairperson of the African Union.

This will the first event in the history of Russian-African relations to invite the heads of all African states along with the leaders of major sub-regional associations and organizations. It is expected to result in the signing of a significant number of trade, economic, and investment agreements.

During the discussions, both parties agreed to form a working group to be made up of representatives of the Government of Côte d’Ivoire and the Roscongress Foundation to participate in the forthcoming Russia-Africa Summit in Sochi.

The working group will be responsible for developing a roadmap for organizing investment and trading cooperation. The parties will create a list of priority industries and target projects and another of goods and services for export-import operations.

Kobyakov noted that Russia attaches great importance to deepening cooperation with its African partners in trade and investment that includes the involvement of Russian companies in the implementation of projects in various sectors.

“In 2018, trade between the Russian Federation and Africa increased from USD 17.4 billion to USD 20.4 billion, domestic exports grew by 18.1%, and imports to Russia from the continent grew by 11.1%,” he stressed at the meeting.

Key Russian trading partners include such North African countries as Egypt, Algeria, Morocco, and Tunisia, as well as the Republic of South Africa, located on the other end of the continent.

Contributing to the discussions, the Vice-President of the Republic of Côte d’Ivoire, Daniel Kablan Duncan, underlined strengthening of bilateral relations between Russia and Côte d’Ivoire.

He, however, informed that “the year, 2017, marked a half-century since the establishment of diplomatic relations between our countries. We enjoy friendly relations that encompass many areas of interaction, including political dialogue, security, trade, economic and technical military ties, energy, and scientific, cultural, and cultural exchanges.”

Cote d'Ivoire is one of Russia’s largest trading partners in sub-Saharan Africa, and the beginning of 2019 has been marked by a significant increase in mutual trade.

The outlook for cooperation in energy seems promising, he explained, added that the development of gas production is associated with capital-intensive deep-sea projects (more than 3,000 meters), and therefore we are interested in involving a major Russian company in the development of projects of this nature.

The processing of agricultural products could also be included in a list of key areas of trade and investment cooperation with Russia, he said.

“We are, particularly, pleased to learn that President of Côte d'Ivoire Alassane Ouattara will be participating in the Russia–Africa summit. Even more significant is the fact that the upcoming visit of Cote d'Ivoire’s head will be the first in the history of bilateral relations between our countries, Kobyakov said in remarks.

In closing the meeting, he added: “key for the development of bilateral trade and investment cooperation will be the search for and joint development of key areas for a mutually beneficial partnership between Russia and Côte d'Ivoire.”