Why Nana Akufo Addo Deals With The Right World Leaders 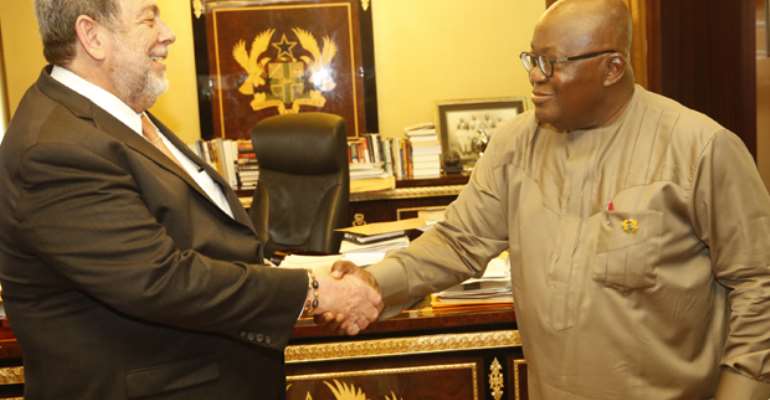 Left, Ralph Gonsalves, the president of St. Vincent and the Grenadines and the Ghanaian leader, Akufo-Addo: photo credit- Dailyguide Network

What I see in the black continent of Africa is that many understand internal politics more than external. It makes sense because some people are suffering at home, therefore, the need to tackle the issues at home is more important but as indicated in several of my articles, Africa's development and economy are at a slow pace because of the roles of external factors too.

Again, I have said many times that there is no African leader there who is stupid. African leaders are extremely intelligent but what many don't realize is they are continuously fighting invincible forces of external aggression they don't feel comfortable to speak about it because once done, the problems which will escalate through the entire African continent and other parts of the world will be a catastrophe.

Firstly, every intelligent African need to think about this question: why there is no African base in any part of the developed world, including the United States of America? And secondly, why the US government is building its military bases all over Africa? Is it because the US government loves Africa? Is it because Africa, one of the richest continents in the world now plagued with uncountable diseases needs protection?

In my life, since my youth to adult life, I have never heard of any Ghanaian joining the ISIS, Taliban or any terrorist group to fight the government of Ghana but I have heard British and American citizens, leaving their countries of origin to join other terrorist groups to fight against their own country, why? Because they are not satisfied with the injustices and criminal activities their countries are committing against other poor and vulnerable countries.

If today, the black continent of Africa becomes a target to terrorists it's because of the US government, so many countries hate America to extent that they follow them everywhere and finding a way to seek revenge. That revenge has been or will be Africa's nightmare. The truth is always bitter than the bile, the US government will always lie and try everything to deceive people and cover up their clandestine crimes against mankind.

Recently, I posted an article about Venezuela on ModernGhana news site captioned: The Evil One Is Not Maduro Of Venezuela But The US Government. If the US government doesn't like you, they will make you pass through hell. All African leaders know that the reason for decades they continue to tolerate the US government's nonsense, however, there is a time for everything.

Our President Nana Akufo-Addo just visited Saint Vincent And The Grenadines but how many Ghanaians know that the president of the country which Nana Addo visited, Ralph Gonsalves, blasted the US government, saying: “No country has the right to intervene in another country’s affairs,” over Venezuela? The President of Saint Vincent And The Grenadines called Trump a failure for his aim to isolate Venezuela: Source: https://bit.ly/2MKzH2l

Many ignorant Africans think it's a blessing for the African continent if the US is building it's a military base in their country but it's a curse. The US government know the concrete reason they are trying to build military bases all over Africa because the world is rapidly changing and they are aware that Africa can explode at any time. That military bases across Africa will help them quell any uprising against them in Africa.

If the US government doesn't expect you to reveal any truth about them, they will counterattack, calling you as a lunatic writer. After posting the article: Expose Your Business And Articles To Millions On LinkedIn, because I did mention that if anyone doesn't see my profile on LinkedIn any longer means the US government has taken away my profile since it has happened to me before, ever since we made the health blog '(Secrets of Aids and Ebola Facts Journal)

Yet an American called Jerome Brant, made this comment: "Readers must ignore this writer, Joel Savage, simply because the guy is total braggart, attention seeker, a true hypocrite, primitive filled with numerous inferiority complexes and above all, a mister and master proper who knows it all and better."

This is what a typical American does to protect his country, even though he knows the crime his country is committing. On ModernGhana news site, an America writer writes about the Rwanda Genocide, but wouldn't mention anywhere in the article that it was the US government under former US president Bill Clinton and the Belgium government that are responsible for that genocide which claimed thousands of lives. Do we have to continue trusting these wolves in sheep's clothing?

Africa can be poor despite how rich the continent is but Africans are never stupid. I have learned great things from Africans which surprised me because I had no knowledge that an African can be that extremely intelligent. Together as one, without violence, we must use that great intelligence to seek peace and progress for our dear nation Ghana.

I will take the opportunity to thank the president for his great historical visit to Saint Vincent And The Grenadines.