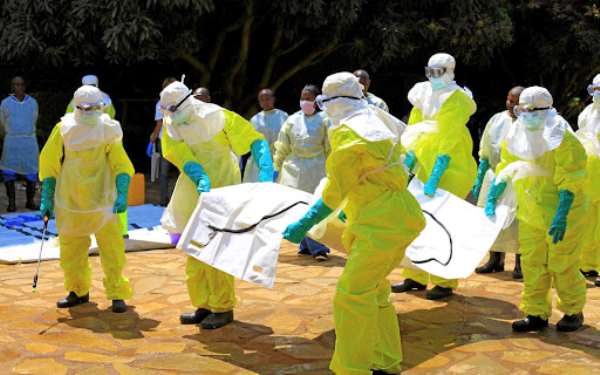 Henry G.R Kerali, World Bank Country Director for Ghana, Liberia, and Sierra Leone has entreated Ghana to stay alert on possible Ebola outbreak whiles ensuring necessary measures are put in place to combat the disease and any other that may arise.

Following the Western African Ebola virus epidemic that disrupted in Guinea, Liberia, and Sierra Leone from 2013 to 2016, all other countries are on high alert to foresee and avert any case that will result in the repeat of what happened.

The epidemic which was described as the most widespread outbreak of Ebola virus disease (EVD) in history led to major loss of life as well as socioeconomic disruption in the three neighboring countries.

Having outdoored the Ebola Recovery and Reconstruction Trust Fund (ERRTF) back in 2014 to fight the epidemic and help the 3 countries get back on their feet, the World Bank screened a documentary at their office in Accra on Thursday, June 13, 2019, detailing the results accomplished under the program. Besides Accra, the documentary was also screened in Conakry, Freetown, and Monrovia.

Speaking to the media on the sidelines of the screening of the documentary, Mr. Henry G. R. Kerali in responding to a question posted by a Journalist on whether Ghana should be worried following recent Ebola cases recorded in some countries shared that the most important thing when it comes to preventing the epidemic is to be vigilant.

“It’s not necessarily being worried but being alert. That’s the most important thing. To be alert, to always be ready to monitor for example the travel of people coming in and out of Ghana. To monitor and make sure that people coming in are healthy and there are systems in place who will take temperatures at the airports, or at the ports, points of entry at the borders and so on. And so being ready, being alert is part of the process of preventing another outbreak of Ebola”, the World Bank Regional Director noted.

He added, “Most important is to be well organized. Be efficient and be alert. Don’t be complacent and don’t take things for granted. Ebola outbreak and indeed any other pandemic can occur at any time. It is when you ignore or you are careless that these things tend to expand very fast and compound itself”.

Since August 2018, there have been recorded cases of Ebola in D.R Congo where at least 2,062 people have been infected, killing as many as 1,390. The latest country to record a case is Uganda who is now trying to stop the disease from erupting into an epidemic.

The World Bank through its Regional Disease Surveillance Systems Enhancement (REDISSE) program, together with other programs continues to partner other organizations in an effort to achieve ‘patient zero’ in all affected regions.