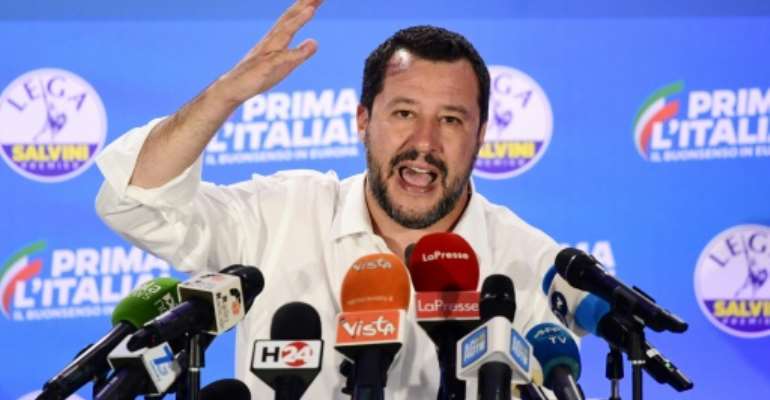 Italian Interior Minister Matteo Salvini has seen his popularity soar in the last year with a hard line against migrants which has included closing ports to rescue vessels. By Miguel MEDINA (AFP/File)

Italian Deputy Prime Minister Matteo Salvini on Thursday launched a crackdown on the German charity Sea Watch whose ship on Wednesday rescued 52 migrants off the coast of Libya.

Salvini, who is also interior minister and leads the powerful right-wing League party in the coalition, issued a decree ordering law enforcement authorities to take all necessary measures to prevent the entry into or transit through Italian waters of the Sea Watch 3 ship.

Reacting on Twitter, Sea Watch said: "Sea Watch won't disembark survivors in Libya -- Tripoli is not a port of safety.

"It is a crime to forcibly return rescued people to a country at war, where they face unlawful imprisonment and torture. Italy promoting these atrocities and the EU being complicit is outrageous."

On Tuesday, Salvini said the 18-article decree would bring fines of up to 50,000 euros ($57,000) for the captain, owner and operator of a vessel "entering Italian territorial waters without authorisation".

Salvini has seen his popularity soar in the last year with a hard line against migrants which has included closing ports to rescue vessels.

The League head, who has attributed a decline in the number of deaths at sea to a deal made with the Libyan coastguard to prevent people from heading to European shores, has repeatedly insisted Italy's ports are closed to migrants.

Salvini says those setting sail from Libya to seek safety in Europe should be returned to the crisis-hit country -- an order that is contentious under international law, and which charity-run migrant rescue vessels have repeatedly refused to follow.

The decree still has to go before Italy's parliament where the coalition government holds a comfortable majority.