'Hundreds' of elephants being poached each year in Botswana: report 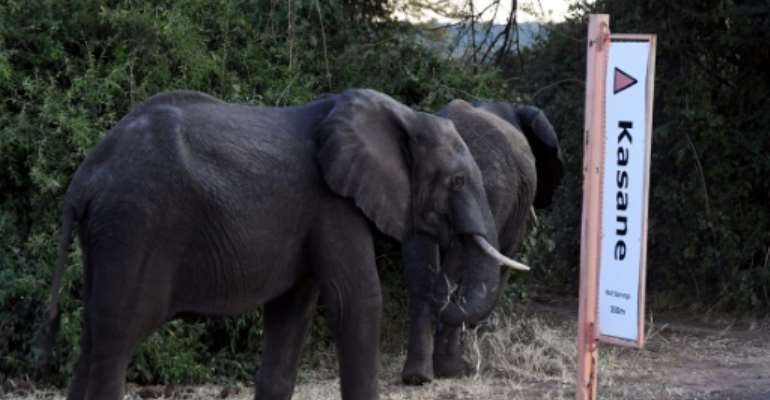 The report noted a 593 percent increase in fresh elephant carcasses since 2014 in the north of Botswana, which last month sparked controversy by lifting its ban on hunting. By MONIRUL BHUIYAN (AFP/File)

A leading conservation group has warned of surging elephant poaching in parts of Botswana and estimated nearly 400 were killed across the country in 2017 and 2018, according to a report published Thursday, adding to conservation concerns.

The Elephants Without Borders research in the scientific journal "Current Biology" will likely increase pressure on Botswana, which last month sparked sparked controversy by lifting its ban on hunting saying it would help control a booming population that was damaging farmers' livelihoods.

Thursday's report noted a 593 percent increase in fresh elephant carcasses in the north of the country since 2014, with many of these found clustered in five northern "hotspots".

"This evidence suggests that ivory poaching on the scale of hundreds of elephants per year has been occurring in northern Botswana since 2017 or possibly earlier," the report said.

EWB last year said it had identified nearly 90 elephants thought to have been poached after an aerial survey, a number that was vigorously contested by the government.

The expanded study published on Thursday estimated that some 385 elephants were killed for their tusks between 2017 and 2018, with 156 confirmed as being poached last year alone.

EWB founder Dr Michael Chase, a co-author of the report, said the latest research was "indisputable and supports our warning that elephant bulls are being killed by poaching gangs".

Botswana officials were not available for comment on the latest research.

The country, which has the largest elephant population in Africa, has previously been a haven for elephants with "little poaching reported" the report said, noting that researchers had not observed any poached carcasses in a 2014 survey.

But its 2018 survey over a 94,000 square kilometre (36,000 square miles) area found 94 recent carcasses and 62 older ones that researchers verified as having been poached.

The researchers did however find that elephant populations had remained broadly stable between 2014 and 2018, at around 122,700.

This decision provoked an outcry from environmental protection organisations.

Botswana's abundant wildlife has made it a popular luxury safari destination and tourism is the second fastest growing sector of the country's economy after diamond mining.