Finance Ministry Briefed On GAMA Project After Exceeding Target By 17% 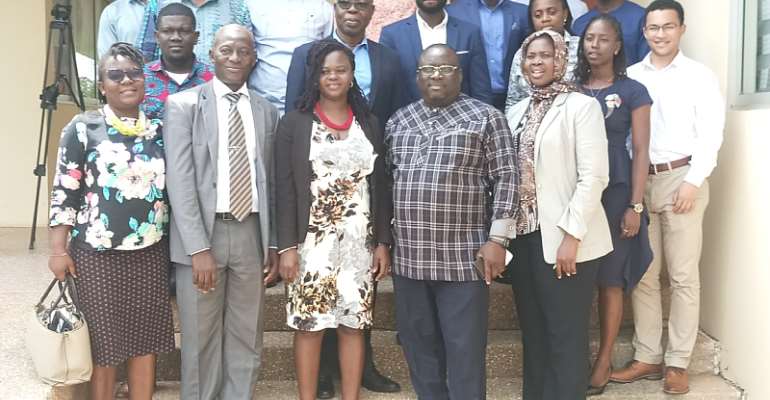 Officials from the Ministry of Finance were told the Greater Accra Metropolitan Area (GAMA) Sanitation and Water project which commenced in 2015 has exceeded its target by 17percent with one more year to go.

This was said at a meeting held at the Institute of Local Government Studies, Accra to brief the Finance Ministry team on the level of progress as the project ends on 31st May, next year.

The team were wowed that between 2017 and 2019, 22,346 household toilets have been constructed, far exceeding the 19,100 target, according to a presentation by Ing. Kwadwo Gyasi, Sanitary Engineer, GAMA Project.

For the institutional toilets, he noted that 406 toilet units have been constructed for 260 schools as at May 2019. Out of the 260 schools, 115 schools have had theirs completed.

Ing. Tenkorang added that water service delivery has been improved to about 367,000 population in GAMA reaching 73,000 households.

According to him, low income urban consumer support unit created and functional under GWCL.

He stressed that 43.50million dollars is required to complete some outstanding works on the project before it expires.

“We set ourselves to construct about 19,100 household toilets with two financiers, one from the GPOBA (now GPRBA) which gave us 4.8million dollars with other funding support from the World Bank. As we speak, the project has a one year live to go but we’ve constructed 22, 342 household toilets exceeding our target by 17percent, one year far ahead of the project closing date. If we continue to the end of the project it will be massive but then, we are also limited by funding,” he intimated.

Mr. Asiedu added that they have lost 12million dollars of the 150million project amount to exchange rate fluctuations.

Mr Asiedu said initially, beneficiaries paid between GH¢1,000 and GH¢2,000 for the household toilets depending on the size and specification of the facility but the toilets were later sold between GH¢600 and GH¢1,200 as the subsidy was increased from 50-70 per cent.

He stressed that 7000 potential beneficiaries who hitherto were not having access to water have been registered waiting to be connected to water.

We still have a lot of people in the pipeline who still need to be connected. Infact we’ve registered about 7000 potential beneficiaries who hitherto were not having access to water because of the expansion of the water network through the project they’ve applied to be connected but unfortunately we’ve exhausted the funding. So what we saying is that all the 7000 need to be connected and we need to continue to expand so that water get to every corner of Accra and the low income communities will also have improved standard of living. Water goes with improved sanitation,” he intimated.

The Ministry of Finance team led by Sauda Ahmed Seinu, Principal Economics Officer, Head of the World Bank Group Unit at the Ministry Finance were enthused with the results of the project after 4years of implementation.

The team will also embark on a three day monitoring visit to project sites in Accra to inspect the quality of work on the ground.