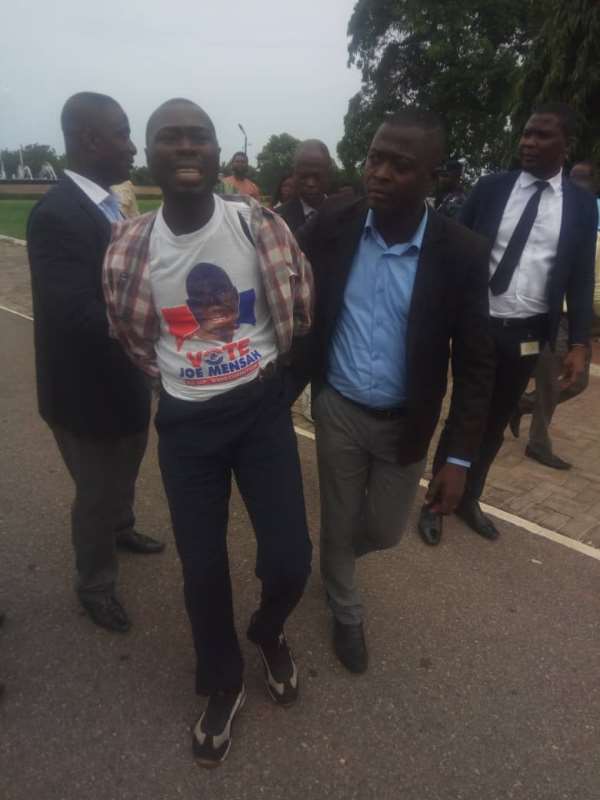 Kojo Mensah, a constituent of Kwasimistim Constituency in the Western Region, deem it convenient to end his life over his inability to cope with life.

The 35-year-old Kojo with a hospital bandage around his arm, on Thursday, June 13, entered the Chamber of Parliament wanting to observe proceedings. But in the mind of Kojo, it was an opportunity to end his life in the chamber.

But Kojo he was spotted on time and was quickly rescued.

Kojo Mensah was arrested by officers from Parliament's Protection Unit for attempting to jump from the public gallery located at the top down the chamber.

He was in an NPP t-shirt bearing the image of Kwesimintsim MP Joe Mensah.

The Parliament security foiled Kojo suicide attempt and taken to the Ministries Police station for interrogation.

What triggered Kojo suicide attempt was not immediately known but information gathered indicated that he had made several attempts to get support from the MP of his constituency but was unsuccessful.

Parliament District Police Commander, Superintendent Freeman Tettey, members of parliamentary Press Corp, accompanied Kojo to the Ministries police for further interrogation to know what might have triggered his action.

According to the police Commander, Kojo observed proceeding but later decided to end his life, describing it as unfortunate.

"I believe more information will be established by police as we still continue with the investigation,” Supt. Tettey stated.

This would be the first time Parliament is witnessing such an incident.