ISMI To Train 20 Navy Crew, Others On Search And Rescue At Sea 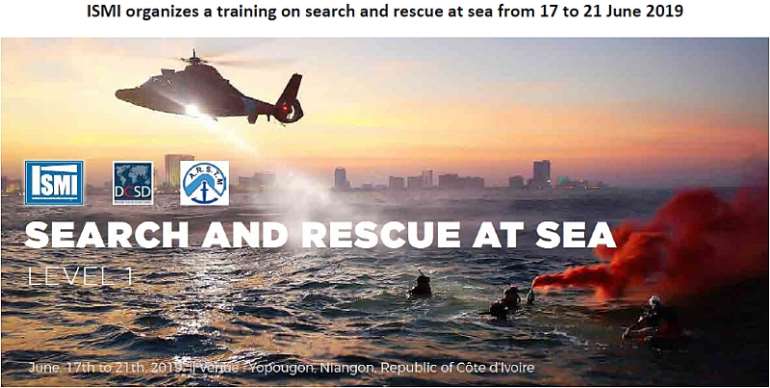 The Interregional Maritime Security Institute (ISMI) is set to organise a training on search and rescue for sea authorities from 17th to 21st June, 2019 at Youpogon, Niangon, Cote d’Ivoire.

In a statement issued by ISMI, about 20 auditors comprising operators of MRCC, maritime operations centers, navy crews, others from eight countries in the northern Gulf of Guinea are expected to participate.

ISMI noted that the training which is scheduled to take place at the campus of the Regional Academy of Marine Science and Technology (ARSTM) will offer both theoretical and practical knowledge to equip participants with the know-how (interpersonal skills) required to effectively coordinate rescuing efforts.

According to ISMI, the Gulf of Guinea presents significant maritime security challenges as one of the busiest maritime crossroads in the world.

It indicates that commercial shipping, offshore activities or industrial and artisanal fishing are high-risk activities making it relevant to find appropriate responses from coastal states for distress at sea.

ISMI added that several of them, within a general framework coordinated by the International Maritime Organization (IMO), have taken steps to ensure that ships and seafarers operating off their coasts (as well as aircraft operating at sea) have access to maritime rescue coordination centers.

While sea rescue has long been based on the solidarity of seafarers, ISMI noted that its organization is now much more standardized and complies with international conventions.

This, according to ISMI, the coordination of rescue and maritime search operations, whether carried out by ships or aircrafts, cannot be improvised hence, the seminar.

The training is supported by the Republic of Côte d'Ivoire and the Directorate of Security and Defense Cooperation (DCSD).