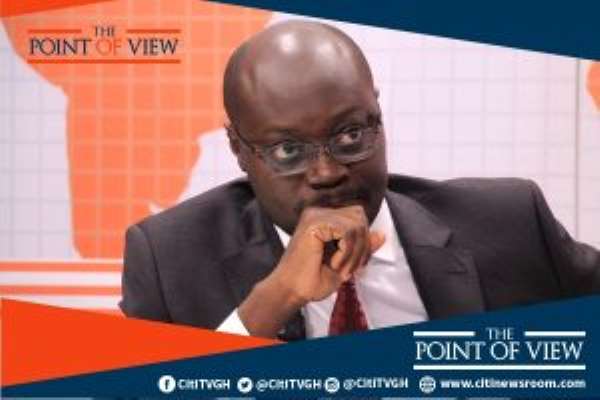 The Minority Spokesperson on Finance, Cassiel Ato Forson says it will be practically impossible for Ghana to payback its alarming debt stock due to the lack of revenue.

According to him, a debt sustainability assessment conducted by both the International Monetary Fund (IMF) and the World Bank revealed that Ghana has failed some four requirements to enable its revenues meet the conditions needed to cater for accrued debts.

His comments come at a time when both the Minority and Majority in Parliament seem to be at war over the state of the country's rising debt stock.

Speaking on Citi TV‘s The Point of View on Wednesday, Ato Forson argued that Ghana has failed to raise the needed foreign exchange adding that the Finance Minister has even admitted that the country is expending a huge chunk of its meagre revenue to settle loan arrears.

He insisted that government has, within two years, added GHc80 billion to the country's public debt stock.

“If you can pay your debts, then it actually doesn't matter. But unfortunately, the recently conducted debt sustainability assessment by both IMF and World Bank prove that Ghana has breached all the four major indicators. As we speak, if you look at the present value of our debts to our revenue, Ghana cannot pay its debts. As we speak, we borrow to service some of our debt and clearly as it stands now, Ghana is not in a position to service its debts looking at the revenue levels.”

“What surprises me is that even the forex part of the debt, where you need foreign currency for you to assess whether you can pay it or not…the amount of forex that we earn is inadequate for us to service our debt. The Finance Minister has said to all of us that about 70 percent of our tax revenue is used to service our debt because the debts are actually going high. It's increasing at an alarming rate”, he added.

But the Akufo-Addo government denied the Minority’s claim that it has betrayed Ghanaians with its reckless borrowing.

Information Minister, Kojo Oppong Nkrumah who spoke on the same show maintained that the Minority's tough position on the matter is just a deliberate attempt to peddle falsehood and write off government's achievements.

“What our colleagues set out to do is to create a negative impression of the case. Spending as a government is not just about infrastructure programs. It is a choice and the Akufo-Addo administration has made that choice that it will put its resources into developing people and give people economic opportunities. You will not see a bridge somewhere but you will see that their wellbeing has been impacted and invested into. This is the choice the Akufo-Addo government has made and we are happy that at the end of the day, we are happy to show that this claim that 75 million dollars change in debt stock because Akufo-Addo has added his own is not true”, he said.