Second patient dies of Ebola in Uganda, as death toll climbs in DRC 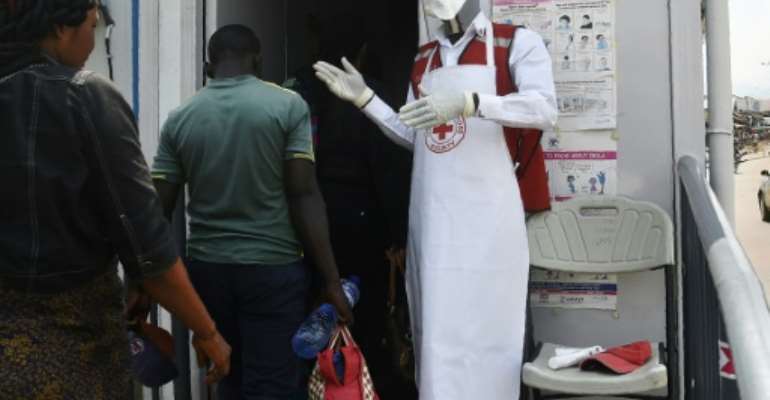 Precautions: Travellers crossing between Uganda and DR Congo were screened for high temperatures and told to disinfect their hands. By ISAAC KASAMANI (AFP)

Uganda on Thursday recorded its second Ebola fatality since the virus spread from neighbouring DR Congo, where officials said a 10-month-old epidemic had now killed more than 1,400 people.

The new toll came as Uganda's health ministry announced that five people, including one with Ebola, had been repatriated to the Democratic Republic of Congo after coming into close contact with the two deceased victims.

The lethal virus crossed into Uganda when a family with small children and their nanny travelled to the DRC to take care of a relative, who later died of Ebola.

The six people "escaped" an isolation ward in the DRC and returned to Uganda via an unofficial crossing on the porous border on Sunday, according to the UN's World Health Organization (WHO).

The next day a five-year-old boy was checked into hospital in western Bwera vomiting blood.

Both he and his grandmother have since died from Ebola, and his three-year-old brother is fighting the virus. 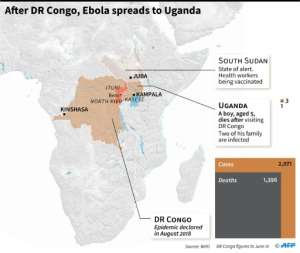 Data and map on the spread of Ebola from the DR Congo to Uganda.. By Alain BOMMENEL (AFP)

"Both victims had attended the burial of an Ebola patient in Congo, but returned to Uganda," a health ministry official told AFP on condition of anonymity.

The deaths mark the first spread of an outbreak in DRC which has recorded more than 2,000 cases, while new figures from the health ministry showed Wednesday that the death toll had climbed above 1,400 for the first time.

At the Mpondwe border crossing, where 25,000 people move between the two countries daily, health officials carried out intensive screenings. 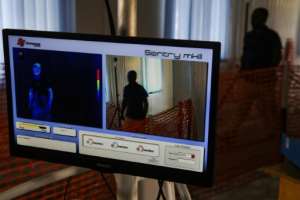 A thermal scanner at Mpondwe is used to screen travellers for high temperature, an early sign of Ebola. By ISAAC KASAMANI (AFP)

Travelers had to pass through thermal scanners to check their temperatur and disinfect their hands.

"The outbreak is not a surprise. We expected it. People cross the borders all the time and interact a lot," said Dorcus Kambere 29, a Ugandan bar attendant.

Twenty-seven people who came into contact with the deceased have been placed under observation, the WHO said in a statement.

However the initial group affected had agreed to return to DRC so they could receive "family support and comfort" from their remaining relatives in Congo -- including five already with Ebola, Uganda's health ministry said in a statement.

The infected three-year-old was repatriated by ambulance along with his father, mother, her six-month-old baby, and the nanny.

East Africa has been on high alert since the outbreak was declared in the eastern DRC provinces of North Kivu and Ituri.

According to the WHO, Uganda has vaccinated nearly 4,700 health workers in 165 facilities with an experimental drug designed to protect them against the virus.

South Sudan has also declared a state of alert and vaccinated health workers.

The European Union on Thursday announced emergency funding of 3.5 million euros ($3.9 million) for Uganda and South Sudan to prepare for and fight the outbreak.

WHO will hold an emergency meeting Friday to determine whether to declare the outbreak "a public health emergency of international concern," a major shift in mobilisation against the disease.

The emergency committee had in October and again in April held off doing this, partly because the virus remained contained in one part of DRC. 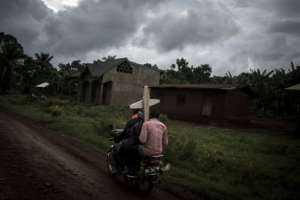 Deadly: Three Congolese on a motorbike in the Ebola-hit DRC province of North Kivu head to a graveyard, carrying a cross. By John WESSELS (AFP)

Efforts to curb the spread have been hampered both by militia attacks on treatment centres and by the hostility of some local people to the medical teams. Five workers have been killed, according to an AFP tally.

Ebola is transmitted to people from wild animals and spreads among humans though close contact with the blood, body fluids, secretions or organs of an infected person.

Mahama insists on second round in closing address to Supreme...
3 minutes ago