Our Chairman Arrest Won’t Stop Us From Winning 2020 — NDC 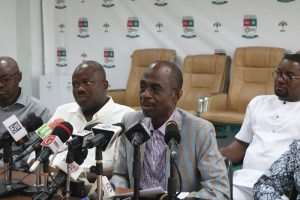 The opposition National Democratic Congress (NDC) says the arrest of its National Chairman, Samuel Ofosu Ampofo will not stop their undying resolve to recapture power in 2020.

It claimed the Criminal Investigations Department (CID) was allowing itself to be used as a political tool to infringe on the fundamental human rights of Ghanaians.

In a statement to set the records straight on Tuesday’s detention of Mr. Ampofo, the party maintained that it is bent on reliving the country from the shackles of the Akufo-Addo administration.

“The party is poised and ready for victory 2020 elections and absolutely nothing will stop our forward march to save the people of Ghana from the clueless and inept leadership of Nana-Akufo-Addo.”

“We call on the Police CID not to allow itself to be used to play politics with the rights and lives of the citizens of Ghana. Ghanaians are very worried about the general state of insecurity in the country and that this apparent grand-standing by the police CID is a far cry from their duty of being the primary defenders and protectors of all Ghanaians”, the statement added.

Meanwhile, the NDC has urged its members to exercise restraint and continue to conduct their activities within the law.

“The NDC as the largest opposition party would like to assure its teeming supporters that it remains law-abiding and that Chairman Ofosu-Ampofo and the leadership of the party can always count on the solid intimidated or suppressed. We would never allow ourselves to be intimidated or suppressed. We would never surrender any of our rights guaranteed under the 1992 Constitution, which we graciously birthed. We will resist oppressors rule in Ghana.”