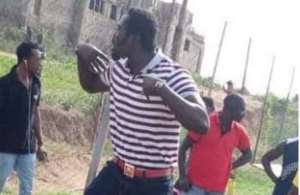 Delta Force, a militia group, known to be associated with the ruling New Patriotic Party (NPP) has disowned it leading member Seidu Mba, who has been nabbed by the state security over the kidnapping of the two Canadian girls.

Seidu was arrested at dawn together with his gang member at a location in Achiase.

But in a sharp defence, the ruling party New Patriotic Party and leader of the defunct Delta Force have denied knowledge of Seidu Mba.

Kwadwo Bamba, deployment commander of the Delta Force publicly said Seidu Mba was not a member of their group, describing the news as false.

According to him, none of their members has been arrested in connection with the Canadian ladies at Ahodwo Hotel.

Speaking to local media in Kumasi, Bamba said the Delta Force has been dissolved and that no one still holds himself as a member.

According to Bamba, Seidu Mba has been mistaken for their former Director known as Mohammed Seidu.

He indicated that Mohammed Seidu has not been arrested, stressing that members of the public have been confused with the two different names.

Bamba further claimed that Mohammed Seidu is not related to Seidu Mba and wondered why members of the public could conclude on that tangent.

He said the NDC is bent on linking the suspect to the group so they could tag him to the NPP because Delta Force is affiliated to the ruling party.

Further checks by Modernghana indicated that the Delta Force has ceased operating as a group.

The arrest of Seidu Mba has gone viral on social media with his images as a member of the Delta Force.

Seidu Mba is alleged to be part of the Delta Force member who forcibly freed their colleagues standing trial for Assault against Public Officer at the Kumasi Circuit Court sometime in 2017.