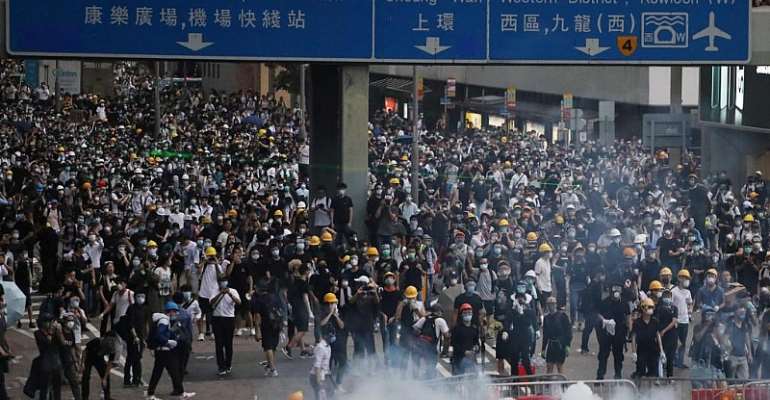 Violent clashes have erupted again in Hong Kong as police used tear gas, pepper spray and batons against demonstrators who were trying to reach the parliament to protest against a controversial bill which would allow extradition to the mainland.

“There are reports that the police even fired plastic bullets against us. I tried to convince the police and the protesters to stay calm and stop attacking each other. But without any warning, the police sprayed me with pepper spray. I went back to the parliament building, but the police prevented me from entering, saying that the whole building is blocked."

Police used teargas, rubber bullets and batons to disperse crowds of black-clad demonstrators -- most of them young people and students.

The demonstrators called for the authorities to scrap amendments to the “Fugitive Offenders Ordinance” that would allow Hong Kong authorities to send people to mainland China if Beijing were to issue an extradition request. The legislation dates back to 25 April 1997, just two months before London handed back Hong Kong to Beijing.

Article 1 specifically states that the law allows extradition of “fugitive offenders” to a place outside Hong Kong, excluding the People's Republic of China. Hong Kong's Beijing-backed legislators want to include China as well.

China's official Xinhua News Agency says that the amendment aims to solve "practical problems" - to deal with a 2018 homicide case in Taiwan which involves a Hong Kong suspect who has returned to Hong Kong. And also to “fill loopholes in the existing legal framework concerning mutual legal assistance in criminal matters.”

That didn't go down well with hundreds of thousands of demonstrators who see the move as further proof that Beijing wants to undermine promises under the “One Country, Two Systems” structure where Hong Kong is supposed to retain its quasi-independence.

The scenes echoed the pro-democracy "Umbrella Movement" of 2014 where protesters calling for greater democratic rights shut down swathes of the city for two months and battled police but won no concessions from Beijing.

In a repeat of four years ago people flooded major roads and junctions on Wednesday, dragging barricades onto highways and tying them together. Others plucked loose bricks from pavements.

No fair trial
On Wednesday the chairman of the Hong Kong Bar Association Philip Dykes called in a letter to Hong Kong Chief Executive Carrie Lam to “withdraw the bill for a full and proper consultation,” pointing out that “torture persists on the mainland,” even if it is against the law, its practice is “concealed, and its use difficult to detect,” suspects are often tortured outside videotaped interrogation sessions, evidence obtained by torture is “frequently admitted in court” and anyone who wants to report torture faces “substantial disincentives,” adding that Beijing cannot guarantee a fair trial.

In spite of these reservations, some forty countries already have extradition treaties with China, including EU member states Bulgaria, Lithuania, Portugal, Romania, Spain and France.

According to Raúl Romero Núñez, a lawyer whose firm Sanchez-Cervera in Madrid works with extradition cases, says that like France, the Spanish-Chinese extradition treaty reserves the right for Spain not to extradite people if they are likely to face the death penalty, or if they could be prosecuted for “political crimes”.

But he admits that guaranteeing human rights for those who are sent to Beijing to face Chinese justice is a problem. “I think it is difficult,” he says, “I think the Spanish government and Spanish justice cannot assure the guarantees. They can only apply the extradition treaty with China, and they cannot know if they are going to be punished or tortured.”

Meanwhile, Hong Kong's stock market sank nearly 1.8 percent on Wednesday because of the city-wide turmoil while the parliament cancelled the scheduled debate. But authorities are determined to have the law on the books as soon as possible.

Protesters have vowed to keep hitting the streets until the bill is shelved.

"The only responsible thing to do now is for Carrie Lam to withdraw the evil bill, or at least to shelve it in order to solve the crisis," said pro-democracy lawmaker Fernando Cheung.