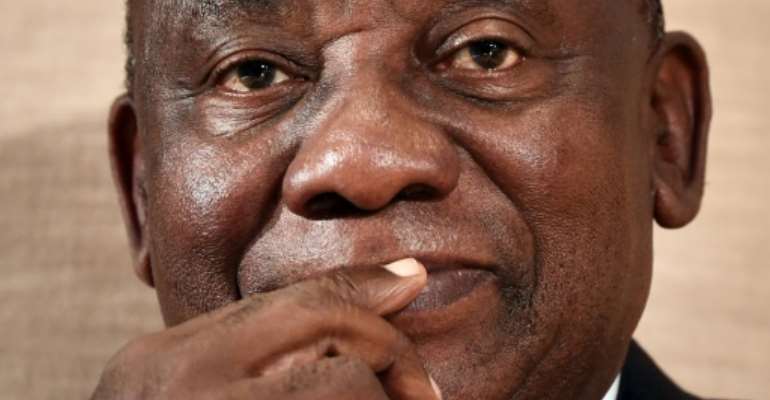 The South African President Cyril Ramaphosa is under investigation by the country's anti-corruption watchdog over a 500,000 rand ($35,000) donation to his campaign fund from a company facing extensive graft allegations, the presidency said Wednesday.

Ramaphosa, who was re-elected last month, has staked his reputation on fighting corruption in a nation smarting from the graft scandal-tainted tenure of his predecessor Jacob Zuma.

But his party has continued to face wideranging corruption claims against senior figures and even the president himself.

The inquiry against him centres on opposition complaints over a payment from Bosasa, a company that corruptly won huge government tenders under Zuma's tenure.

According to the South African presidency, the country's ombudswoman Busisiwe Mkhwebane has issued Ramaphosa with a notice to respond to allegations that he violated the executive ethics code.

"It is served on an individual when they are implicated in an adverse or detrimental manner in a current investigation," the president's spokeswoman Khusela Diko said.

Ramaphosa has told parliament that the payment in October 2017 was to his son Andile for consultancy work for Bosasa, which was renamed African Global Operations.

But he later said it was a donation towards his own campaign to become leader of the ruling ANC party, a hard-fought battle in which he beat Zuma's chosen candidate.

Ramaphosa, who promised to pay back the campaign funds, has until 21 June to respond to Mkhwebane.

Diko said the President will be allowed to question the complainant, leader of the official opposition Mmusi Maimane and other witnesses.

The ANC, which has ruled since the end of apartheid, battled numerous corruption scandals under Zuma.