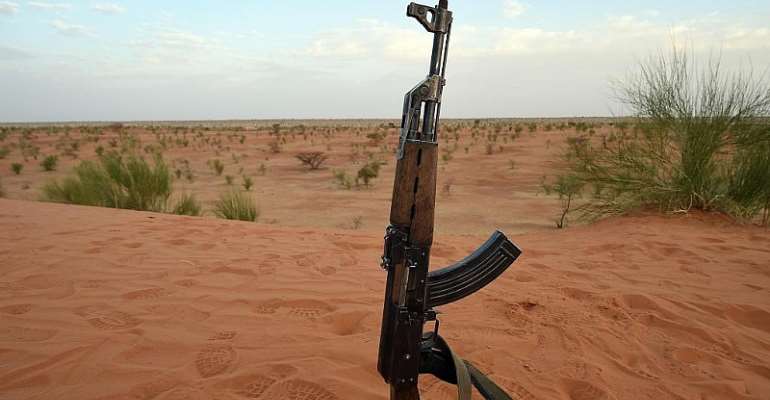 Mali's President Ibrahim Boubacar Keita has called for calm and unity amid rising fears of intercommunal violence, after scores were killed in an attack on a Dogon village. France – which in 2012 intervened in Mali to halt Islamist rebels – has urged Bamako to put an end to the bloodshed.

"This country cannot be led by a cycle of revenge and vendetta," Boubacar Keita told ORTM public television from Switzerland, where he cut short an official visit Tuesday.

The Malian president called on the country to unite "because this is a question of survival", he said.

Some three months after a deadly assault on members of the Fulani ethnic group, Mali is reeling again from what appears to be a reprisal attack, this time targeting the Dogon community.

Nearly one hundred of the village's 300 residents were killed on Sunday when unknown armed men attacked the village of Sobane-Kou, in the Mopti region. The gunmen shouted Allahu Akbar [God is great], according to the village chief. Nineteen people were still missing on Tuesday.

There was no immediate claim of responsibility for the massacre. Hundreds of people have been killed in the area in tit-for-tat ethnic attacks since January

Crossing red lines
Mali's prime pinister Boubou Cissé visited the site of the massacre with other senior ministers on Tuesday and paid tribute to the "innocent victims of the discord of hate."

Cissé echoed the president's call for reconciliation, vowing to step up security, economic and political efforts for peace.

Yet the message may fall on deaf ears.
An armed group of ethnic Dogon hunters, known as Dan Nan Ambassagou, has already vowed revenge for Sunday's killings, condemning them as an "act of terrorism and a declaration of war."

The Dogon militia was accused of killing up to 160 members of the Fulani ethnic group in March - one of the worst massacres in Mali's history. The group was later disbanded by the government but has so far refused to give up its weapons.

For the UN peacekeeping mission MINUSMA, the risk of escalation is very real.

"Civil war is when communities attack one another. We must avoid this at all costs," said MINUSMA chief Mahamat Saleh Annadif, condemning the Dogon militia's "declaration of war."

"That is why I said that the threshold of what's intolerable has been reached," Annadif told RFI.

For others, the red line has already been crossed.
Government reshuffle
"Since the start of the year, we saw attacks in Koulogon [Mopti region] which killed some 40 people; then there was the attack in Ogossagou [central Mali] in March, with over 160 people killed. And today, this massacre in Sobane-Kou, which left nearly 100 dead," comments Ibrahim Maiga from the Institute for Security Studies in Dakar.

"The threshold of what's intolerable has already been exceeded," he told RFI.

This latest attack in the Sangha district has raised questions about the government's ability to reign in insecurity.

In March, the state dismissed several military commanders after the Fulani massacre, but seemingly to little avail.

"A government reshuffle in such a short space of time cannot resolve the root causes of the violence," Maiga cautioned.

"Besides, when you look at the changes made, it was only the prime minister and the defence minister who resigned. But the drivers of the violence are rooted in an incredibly complex situation which cannot be addressed through military action alone," he said.

Roots of violence
The cycle of violence in central Mali began after a predominantly Fulani jihadist group, led by preacher Amadou Koufa, emerged in 2015.

Since jihadists recruited mainly from Fulanis, a largely Muslim ethnic group of semi-nomadic herders, they became associated with them.

This fuelled tensions with other ethnic groups such as the Dogon and Bambara, primarily sedentary farmers, who set up self-defence groups in response.

"As the state lost control of this zone, non-state actors took over, and began arming themselves to protect their families and their livelihoods," explains Maiga.

The Fulanis however accused Malian authorities and army troops of turning a blind eye to Dogon attacks, in the name of the fight against jihadists.

For the cycle of violence to stop, all these groups must be disarmed, reckons Maiga, although he admits it will be tricky.

"The government will need to employ a lot of tact because these groups were set up to fill the void it left."

'No one knows who's doing what'
"Populations too will need to be consulted about what they would like the government's return to look like. These questions must be ironed out first before Mali can come out of its crisis," said Maiga.

Despite military help from France and the UN, the largely Saharan nation has been in turmoil since a rebellion by Tuaregs and allied jihadists took over half the country in 2012, prompting the French to intervene to push them back the following year.

On Tuesday, officials in Paris urged Bamako to "redouble efforts in the centre of the country to quickly put an end to the spiral of intercommunal violence," the foreign ministry said in a statement.

However for Hounkpe, Bamako is not the only one at fault.

'Serious conversation'
"When we look at the security situation in Mali, let's not go the easy way in condemning only the Malian authorities," he told RFI.

"The international forces present in Mali need to sit down and look at the landscape and say who is doing what, name the rebels or jihadi forces," he said, referring to the MINUSMA peacekeeping force, France's Barkhane operation and a G5 Sahel force that is not yet fully operational.

"It is surprising that these people [rebels, jihadists] can continue moving and attacking places in the country as if there is nobody on the ground."

All of these international actors need to have a "serious conversation," he said. "The Malian authorities alone cannot do that."