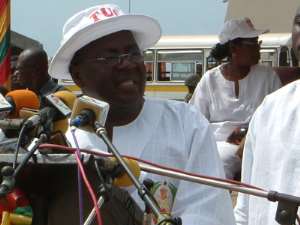 The Vice President, Alhaji Aliu Mahama, has expressed concern over what he described as abuse of democracy by certain media houses, allowing persons to rain insults on the presidents and other leaders through their networks and newspapers.

According to him, true democracy meant participatory democracy where chiefs, opinion leaders and the ordinary citizens joined hands to implement programmes that would seek the development of the country but not to insult our leaders.

He therefore appealed to chiefs, religious and opinion leaders to use their authority to educate their subjects and the entire public in order to improve the system of law and order in the country.

Alhaji Aliu Mahama expressed these concerns when he paid a courtesy call on the Kwahumanhene, Daasebre Akuamoah Boateng, at Abetifi on January 22.

The Vice President was accompanied by ministers and MPs from the region, some members of the National Executive of the New Patriotic Party (NPP), including the National Chairman, Mr. Peter Mac Manu and General Secretary, Nana Ohene Ntow, as well as some Eastern Regional NPP executives.

Earlier in a welcome address, Daasebre Akuamoah Boateng had appealed to the government to improve road networks that link Mpraeso in the Kwahu South District to the Afram Plains district, one of the country's food baskets, which were in very bad conditions.

Daasebre did not understand why the area, though blessed with the Volta Lake, continued to suffer from water shortage, and called on the government to improve supply of water in the Kwahu Mountains.

The kwahumanhene observed that if proper care was not taken in the administration of the poverty reduction scheme, it would collapse, therefore calling for a total review to include chiefs in running the scheme.

He explained that if chiefs were appointed members of the administration board, they would make sure that the scheme succeeded by ensuring that whoever took a loan refunded it for it to grow.

He expressed concern about the high incidence of accidents occurring on our roads especially between Accra, Nkawkaw and Kumasi, which portion fell within his traditional jurisdiction, and suggested to Parliament to enact laws that would compel every driver in the country to abide by the national speed limits and avoid over-speeding and unnecessary over-taking, which were the main causes of accidents on the country's roads.

Another concern he raised was over the mass production of local foodstuff and failure to market them, though foreign products, which discourage the youth from going into serious farming, were well-marketed.

The number one concern the Kwahumanhene expressed and appealed to the Vice President for immediate solution for, was the serious destruction of lives and properties by the Fulani herdsmen in the Kwahu Traditional Area.

According to him, these Fulani herdsmen had been burning down residents' thatch houses and farms, raping children and woman, destroying water bodies and state properties. He appealed to the government to tighten up security on the nation's borders to check the inflow of such foreigners who only enter the country to cause trouble.

Responding to appeals made by Dasebre Akuamoah Boateng, the Vice President expressed the hope that more would be done to improve the lives of the people in the area and the nation as a whole.

Alhaji Aliu Mahama assured the chief and people of the area that he would take various departments and institutions to task to ensure that the road networks and water supply systems in the area were improved, as well as looking at their request to rename the Afram Plains as Kwahu North District.

He disclosed that a programme soon to be introduced by government to improve upon the judicial system, would see chiefs involved in total governance in the country, which accordingly, could not be over-emphasized.

Alhaji Mahama used the occasion to warn the general public that the poverty reduction scheme loan was not meant to be disbursed to party followers alone, but to every resident who needed financial assistance to improve his/her business, stressing the need for beneficiaries to repay their loans to enable its success.

On the mayhem caused by Fulani herdsmen, he disclosed that Cabinet was looking at how best to solve the problem with the security agencies. He praised Okwahuman for lack of chieftaincy disputes in the area and urged Nananom to continue to live in peace and harmony with their subjects, to push the country's development agenda forward.