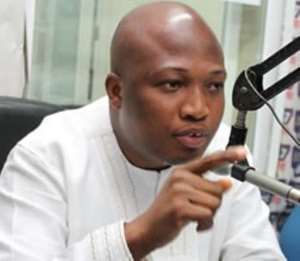 He noted that the NPP has laid a precedent for political parties to treat political opponents and their utterances which bothers on national security.

According to him, under the NDC administration, some members of the NPP made serious comments which threatens the security of the nation but for the sake of peace and tolerance for opponents views, overlooked.

In a statement-making round on social media, the former Deputy Minister of Education said, the NPP handling of Ofosu Ampofo alleged conspiracy to kidnap relatives of party opponents smack of hypocrisy.

He said, NDC is patiently learning from the ongoing persecution and prosecution of its party National Chairman and would not hesitate to replicate same or worse than that when the opportunity comes some day.

Mr Ablakwa cited Akufo-Addo's infamous "All Die Be Die " mantra, among several other utterances by members of the NPP during the NDC administration as worst than all.

" Samuel O. Ablakwa Writes: The silver lining in this Ofosu-Ampofo affair is that the NPP is teaching the NDC how we should have handled the Akufo-Addo "All die be die" tape, the Anthony Karbo "Bad Boys from Libya, Benin and Liberia" tape, the Atta Akyea "Dead Bodies" tape, the Sammi Awuku "Target Judges for Elimination" tape, et cetera; and what has now been established as the new standard moving forward.

Perhaps this new standard cannot be bad for our national politics, if we reflect deeply."