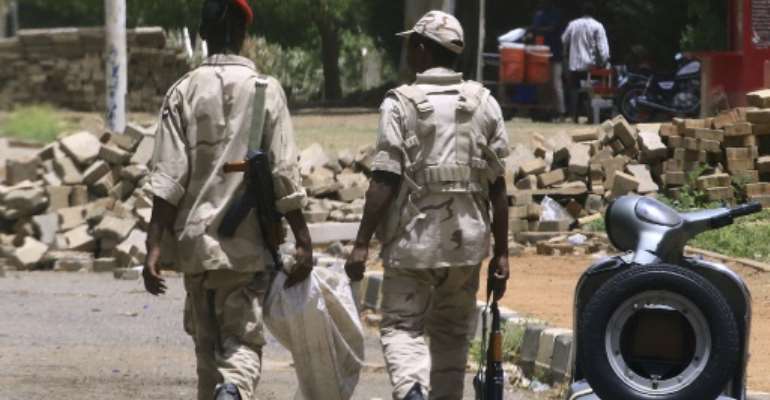 Sudan has been led by a military council since it toppled autocratic president Omar al-Bashir on April 11 after months of nationwide protests. By - (AFP)

Amnesty and Human Rights Watch have warned UN peacekeepers against withdrawing from Sudan at a time when the Janjaweed militia is not only keeping up war crimes in Darfur but also taking its "despicable brutality" to Khartoum.

"It's hard to imagine a worse time to decide to close UNAMID," the United Nations-African Union Mission in Darfur, said Jonathan Loeb, a senior crisis adviser at Amnesty International.

As a June 27 vote on whether to wind down UNAMID nears, Amnesty said it had "new evidence, including satellite imagery, showing that Sudanese government forces, including the Rapid Support Forces (RSF) and allied militias, have continued to commit war crimes... in Darfur".

"These have included the complete or partial destruction of at least 45 villages, unlawful killings, and sexual violence," the rights group said in a statement issued Tuesday.

The RSF, formed from the former Janjaweed militia, were also responsible for the June 3 crackdown on protesters in Khartoum that killed dozens, Amnesty said.

"In Darfur, as in Khartoum, we've witnessed the Rapid Support Forces' despicable brutality against Sudanese civilians," it said.

New York-based Human Rights Watch, in a separate statement, said: "Instead of giving a green light to a continued drawdown of UNAMID, the (UN) Security Council should focus on preserving the mission's capabilities to protect civilians and monitor human rights abuses."

The Janjaweed were first recruited when Khartoum trained and equipped Arab raiders to crush an ethnic minority rebellion in the vast western region of Darfur that erupted in 2003.

The violence in Darfur has substantially reduced over the years, and the Janjaweed have been absorbed in the RSF, headed by Mohamed Hamdan (Hemeti) Dagalo, the deputy chief of the military council which ousted longtime president Omar al-Bashir in April.

"Sudan's political instability inevitably has an impact on Darfur, especially given the rise of Hemeti and shocking news that (UNAMID) mission assets are going to his forces, despite the RSF's long track record of abuses," said Jehanne Henry, associate Africa director at HRW.

"The RSF needs to be investigated for its abuses, not given tasks it's unfit for," Henry said.

"The case against closing UNAMID has been made even stronger" by the crackdown in the capital, said Amnesty.

Loeb said: "A decision to remove the last remaining peacekeepers from Darfur at this time would reveal a shocking lack of understanding about the current reality in Sudan."