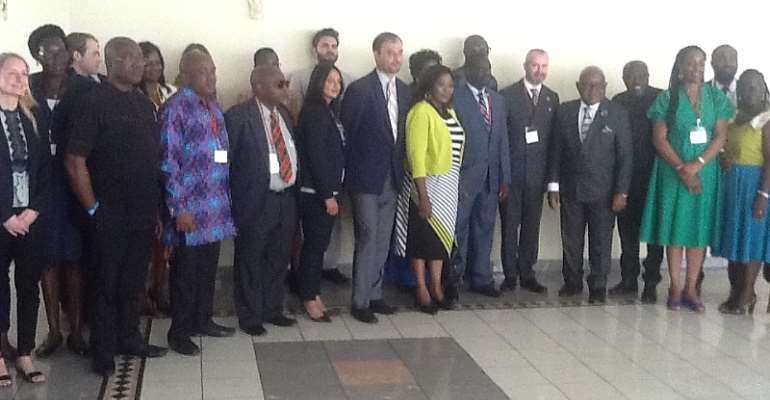 Speaker with CPA members at Workshop

Ghana's Speaker of Parliament, Rt Hon. Professor Aaron Michael Oquaye has charged parliamentarians in Africa to join forces with their counterparts in the United Kingdom(UK) to fight against the menace of human trafficking and modern slavery on the continent.

According to him, the human trafficking and forced labour is not only crime against humanity, but also undermines the development of less privileged countries in the Africa sub-region and must be nipped in the mud with strict regulation.

He rallies the support of the Parliamentarians of Commonwealth countries to press for increased investment in fighting modern slavery and human trafficking which has destabilized and destroyed families in Africa.

Rt Hon Prof Mike Oquaye made the call during the opening ceremony of a three Day Workshop and Conference of the Commonwealth Parliamentary Association (CPA) in Accra Tuesday, June 11.

The three days workshop was on the theme: "Experts Regional Workshop: the Role of Parliamentary Committees in Combating Human Trafficking and Forced Labour."

This, the Speaker called on the parliamentarians on the continent to use their influence and powers to combat all acts of forced labour and human trafficking.

He stressed the need for the lawmakers to ensure government invest funds in the fight against human trafficking modern slavery, especially children.

"This is an opportunity to exchange notes, share ideas as to how best we can fight this problem. Africa is now their sources or the destination of these criminal activities because of poverty. They (Traffickers) come and take away our children into forced labour because of poverty. Take them away from poverty and bring them back with poverty," Rt Hon Prof Oquaye opined.

The Speaker added that it was about time parliamentarians take the initiative to fight what has been globally accepted as an illegal business, violation of fundamental human rights which has led to increase in poverty among families and countries in Africa.

He further urges the CPA members to brainstorm on measures to improve and strengthen laws that are meant to fight human trafficking in order to ensure that those laws are relevant and up to date.

The Speaker noted that, as part of measures to curb the menace of human trafficking and forced child labour, the government of Ghana in 2016 set up a Human Trafficking Secretariat for the police services with the power to arrest and punish perpetrators.

Ms Adeline Dumoulin, Head of CPA project said, the workshop is necessary because there are over 40 million victims of human trafficking and forced labour worldwide with over half of the number within the Commonwealth countries.

According to her, parliamentarians with both access and influence in their communities, have a unique and significant role in addressing this heinous crime and by extension, the parliamentary committees have the influence to present research, scrutinize legislation and provide oversight implementation.

The three-day workshop will bring members of parliamentary committees from the parliament of Ghana, Uganda, Nigeria, Kenya, Namibia, the UK and the Turks and Caicos Islands.

The CPA UK’s Modern Slavery Project which is the initiative of the UK Parliament sought to annually bring together Commonwealth parliamentarians to share ideas on how to fight the devastating crime of human trafficking and forced labour.