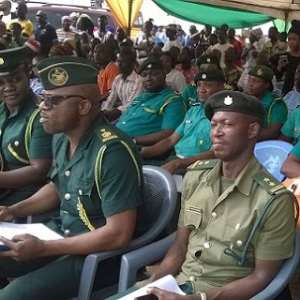 In the rapidly changing conditions of a globalizing world, African governments should develop migration policy measures ahead of time in order to ensure the flow of highly skilled migrants into their countries but it has never been so.

Due to weak porous frontiers, corruption, and non-effective immigration policies, many African countries, including Ghana, are full of unskilled labourers, including criminals, that are not contributing to the economic success of the country.

Gabon being one of the richest countries in Africa always attracts foreigners from other African countries, yet, one-third of the country’s citizens live below the poverty line.

The country’s immigration officers never relaxed on their oars. They detain everyone they feel not qualified to enter the country.

In 2014, the government of Gabon released 100 of 500 Cameroonian, Chadian and Central African illegal immigrants detained for 10 months for unlawful mining.

The Ghanaian government has never been very serious on such immigration policies until Ghanaians expressed their anger over an environmental hazard in the country.

Another country in Africa with good immigration policy is the Gambia. It is a country that has made a fortune through tourism. It may be likely that the government of the country is scared of foreigners.

I remember when I was given twenty-four hours to live in the country, during a visit, with the advice to see the Director of Immigration to explain the reason for my visit.

I did that and I was given a month. I have never experienced this in any African country. Immigration is ruining many countries economy with crimes.

This is what Donald Trump wants to avoid but the opposition wants to portray him a bad leader. Immigration comes along with many criminals who will do everything to survive.

The reason the US government is fighting infinite crimes which many of the culprits are from Latin America.

There was a time Ghana is not familiar with armed robbery. Then suddenly some of the immigrants from neighbouring countries living on armed robbery introduced this criminal act to some lazy Ghanaians who want to be rich overnight.

Today, Ghanaians have no peace, mostly living in fear because of rampant armed robbery in the country. It is no more a secret that many foreigners living in Ghana sell narcotics, such as cocaine and other hard drugs for a living.

This is very dangerous for our young ones that many aren't fully aware of the dangers of drug addiction.

The Ghanaian government needs to implement an effective immigration policy. The country needs skilled people to engage in the development of the country by paying tax, not those involved in criminal activities to ruin our economy.