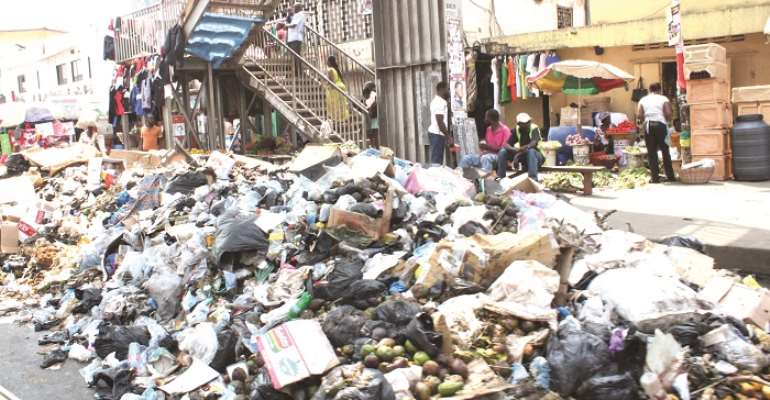 After critically analysing the menace of waste, you cannot, but conclude that, the only sustainable solution to waste management lies in behavioural change and enforcement of existing sanitation laws.

Ghana, with an estimated population of over 30 million, is struggling to find a lasting solution to its volumes of filth been generated on a daily basis.

God in his own Wisdom, created a clean and fresh environment for living creatures but as the population grows, man-made activities are defeating the purpose it serves.

Human attitude and behaviour has completely changed the beauty of our environment and replaces it with filths.

It is evidently clear, that, pollution and waste have become a threat to our environment and urban dwellers suffer most, simply because they deliberately litter the environment with all forms of waste.

Waste has enveloped us and pursues us from our streets to our closets, which needs swift attention from all, else, we risk losing out our fresh and green environment.

Unfortunately, the officials designated to crack the whip with sanitation offenders have been completely corrupted by the system, due to lack of logistics and resources to man their office and personal needs.

This compelled John Agyekum Kuffour's government to introduce waste collection company operating under the name, Zoomlion Ghana limited, to man the waste in the system.

Part of the common fund of each District Assembly in Ghana is deducted at source, to contribute over GH¢ 400 million old Ghana cedis on a quarterly basis for waste collection.

Despite this whopping sum of money, waste collection and management has become hectic for the company.

It is estimated that the 254 Metropolitan, Municipal and District assemblies spend more than GH ¢400 billion old cedis annually on waste collection, which could have been used to provide other needs of the people, but the people are simply not ready to trade their daily ritual of littering for infrastructural development.

Not only does it affect the environment, but it also endangers our water bodies, thereby posing unnecessary health risks.

As we speak, all our water bodies in the cities have been polluted with both solid and liquid waste.

The irony of it is that the polluted water is used for our vegetable production in the cities, which ends up in our homes and restaurants.

Quite apart from that, the rivers overflow their banks and cause serious problems to lives and properties, which eventually eat into our national purse.

The former local government and rural development minister in the late Atta Mills-led administration, Mr. Julius Debrah took graceful steps to end indiscriminately, dumping of refuse and garbage onto our streets by introducing national sanitation day on every first Saturday of every month.

As laudable as the idea was, we could not sustain it as a nation after exiting office in 2017.

Most people, unfortunately, forget about the effects of littering the environment and its hazardous repercussions on our lives.

Along with it, the current political administration NPP has established a sanitation ministry to oversee the management of waste in Ghana.

Although the ministry is working assiduously to curb it, the president of Ghana, Nana Addo Dankwa Akufo Addo has passionately appealed to Ghanaians to change our attitude towards littering the environment.

According to the president, the country can no longer tolerate the current attitude of Ghanaians against the beautiful environment.

However, he wants stringent action taken against anyone found culpable of destroying the beauty of our environment.

It is in line with this, that the Chief Executive Officer of Zoomlion Ghana limited, Dr Joseph Siaw Agyapong is courting the support of the media to help in sensitizing the public on the need to keep the environment cleaner for fresh air.

He said, such people, find nothing wrong in littering the environment, hence his appeal to the media to be at the core of the fight against this canker draining the purse of the country.

It is therefore not surprising that most of our people are infected with malaria and cholera.

Dr. Siaw believes media involvement in the fight against indiscriminate dumping of waste into the streets may change the face of it.

"It is a well-established fact, that, waste, is now cash, and I implore Ghanaians to take advantage of it to create wealth for ourselves," He said.

It is an eyesore to see heaps of refuse on our principal streets in this 21st century.

As knowledge keeps growing, it is so essential for the country to implore every means to turn our waste into useful products than spending unnecessary sums of money just to deal with waste.

Meanwhile, the Kumasi Metropolitan Assembly (KMA) the lead in filling the streets of Kumasi with dust bin the usual Ghana man, would probably dump it on the ground incurring the wrath of the city authority.

More than 50 sanitation offenders have been prosecuted by our courts, yet, no one sees anything wrong in littering the city.