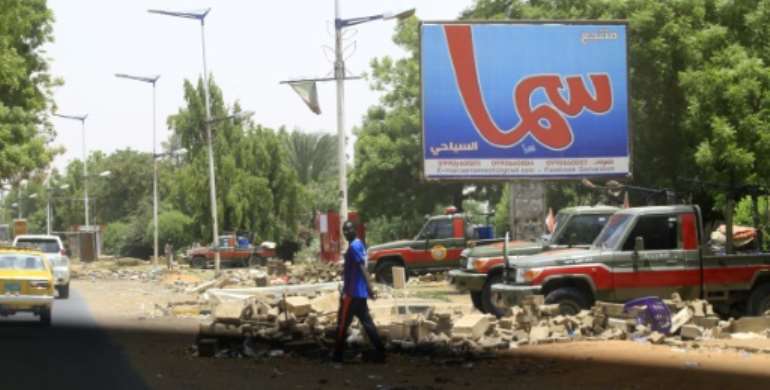 Fewer people than usual were on the streets of Khartoum, patrolled by heavily armed paramilitaries. By - (AFP)

Protest leaders have agreed to end a campaign of civil disobedience launched after a deadly crackdown on demonstrators and to resume talks with Sudan's ruling generals, an Ethiopian mediator said Tuesday.

The apparent breakthrough, which the military rulers had yet to confirm, came as a top US diplomat prepared to embark on a mission to press the generals to halt the crackdown on protesters demanding civilian rule.

Sudan has been led by a military council since it toppled autocratic president Omar al-Bashir on April 11 after months of nationwide protests against his iron-fisted rule of three decades.

Following Bashir's removal, protesters camped outside military headquarters in Khartoum for weeks to demand civilian rule, before security and paramilitary forces dispersed them in a June 3 crackdown that killed dozens.

The protest movement launched a campaign of civil disobedience on Sunday, and most businesses stayed closed and residents hunkered indoors for the next three days.

It had threatened to pile even more pressure on the generals by releasing a list of members for a new ruling body -- the key point of dispute between the two sides.

But they agreed to end the campaign and return to talks, said an envoy of Ethiopian Prime Minister Abiy Ahmed.

"The Alliance for Freedom and Change agreed to end the civil disobedience (campaign) from today," Mahmoud Drir, who has been mediating between the two sides since Ahmed visited Khartoum last week.

"Both sides have also agreed to resume talks soon," he told reporters.

The protest movement itself said in a statement that it was calling on people "to resume work from Wednesday".

In Khartoum, the protest strike saw most shops and businesses remain closed with some companies extending to the end of the week the Eid al-Fitr holidays marking the end of Ramadan.

"We are now getting used to living with guns as we are seeing so many of these men walking into restaurants with their weapons," one resident said as a group of RSF members entered an eatery.

In the northern district of Bahari, a hotbed of unrest where protesters had put had roadblocks in the past few weeks, most shops were closed but there were no barricades to be seen, an AFP corespondent reported.

"This shows clearly what we can do, and also in a peaceful way," said Ishraga Mohamed.

Most Khartoum businesses remain shut leaving the few shoppers who venture out dependent on the central market. By - (AFP)

Protest leaders vowed to name a new ruling body to replace the generals.

"The Alliance for Freedom and Change will reveal its sovereign council and a prime minister in an announcement to be made at a suitable time," the Sudanese Professionals Association, a key member of the umbrella protest movement, said late on Monday.

The crackdown by the military came after negotiations between protest leaders and the generals collapsed late last month over who should lead the new governing body -- a civilian or a soldier.

US call to stop attacks

The US assistant secretary of state for African affairs, Tibor Nagy, plans to meet both the generals and protest leaders in Khartoum, the State Department said.

He is to leave on the trip on Wednesday and also visit Addis Ababa to discuss the Sudan crisis with Ethiopian leaders and the African Union.

"He will call for a cessation of attacks against civilians and urge parties to work toward creating an enabling environment" for talks to resume, the State Department said.

The United States has led calls for a civilian-led transition even as its Arab allies Egypt, Saudi Arabia and the United Arab Emirates have backed the generals.

Protesters have thrown up makeshift barricades on many minor roads in residential districts of Khartoum. By - (AFP)

The military-led government blamed deteriorating conditions in Khartoum on the disobedience campaign.

"We are appealing to those who blocked the roads to open them for all the sick people... since many people lost their lives because they cannot reach the hospital," senior health ministry official Mohamed Altom told reporters during a tour organised by the ministry.