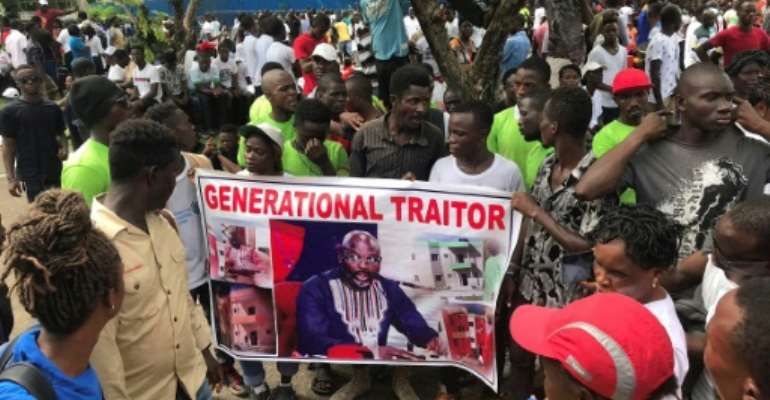 Demonstrators hold a poster portraying Liberian President George Weah as they gather outside the Liberian Mansion in Monrovia on June 7, 2019 during an anti-government march to protest inflation and corruption. By CARIELLE DOE (AFP/File)

Liberian President George Weah on Tuesday invited opponents to "round table" talks to seek solutions to the country's economic woes, four days after thousands protested against rising prices and corruption.

Weah made his offer to "leaders of political parties, civil society groups, elders, religious leaders, our traditional leaders, student leaders and the business community," in a speech aired on national radio.

He suggested "a round table discussion to afford them the opportunity to present their alternative views, or their suggestions on the economy".

A protest coalition on Sunday gave Weah a string of demands with a four-week deadline.

They include improvements in areas such as human rights and corruption, as well as the prosecution of Finance Minister Samuel Tweah and Central Bank Governor Nathaniel Patray in connection with financial problems at the Central Bank of Liberia which led to price hikes.

The coalition also called for Weah and all of his officials to declare their assets.

Revered in Liberia and beyond for blazing a trail for African footballers in Europe, Weah is struggling to revive a country that is one of the poorest in the world and still traumatised by back-to-back civil wars between 1989 and 2003 that claimed a quarter of a million lives.

Weah, 52, is now being challenged over the same issues on which he campaigned in his rise to the presidency of the West African state just 18 months ago.

In his radio address the Liberian president appealed to all citizens: "Let us sit and dialogue on the way forward. Bring your ideas to the table and I assure you that they will be given my most careful consideration.'

He acknowledged that the economy is still facing challenges, stressing that his government had inherited a broken economy.

Addressing last Friday's peaceful protest, Weah said that "some of our citizens have exercised their constitutional rights to publicly assemble with the objective to petition their government. We commend them for the peaceful and orderly manner in which they exercised their rights."