Living As A Child In My Adult Life: A Search For Trust And Humility (part I) 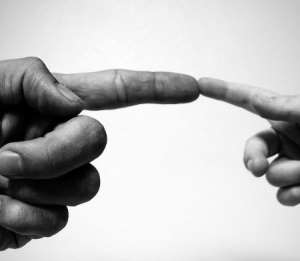 Growing up as a child in Maamobi in the 1980s was very exciting. My parents were my heroes. My father, while calm and always sober, was an inspiring figure for me. As a child, I believed that he could provide all my needs. I never cringed for once that my father could not provide for me. Usually, during Christmas and Easter festivals, he would ask my paternal uncle to sew up-and-down cloth for my brothers and me. Anytime he came home from work, he brought me food and sometimes soft drinks. Though he was a Catholic, he rarely read the Bible. He, however, never had a deficit of stories. Later in life, I realized that these stories were from the Bible. My father was also all-knowing, as he appeared to have every answer to my questions.

In the 1980s, Ghana suffered political and economic morass. When the country implemented neoliberal policies, generically called Structural Adjustment Programs (SAPs), many homes were affected. Farmers were crying because the government removed subsidies on agriculture. Parents and guardians were struggling to pay school fees because the government had removed subsidies on health and education. Life was very tough for many Ghanaians. In the face of these challenges that the neoliberal policies had unleashed on Ghana, many young men voted with their feet. They crisscrossed national and intercontinental boundaries in search of economic respite. Some professionals also left the country to seek greener pastures elsewhere. The 1980s was tantamount to Ghana’s day of agonies!

My father was also hard hit. The retrenchment, which was part of the package of the SAPs, affected him. Before 1987, he worked with the Ghana National Trading Corporation (GNTC). While there, he had a good Hausa friend as a co-worker, and so he learned how to speak Hausa (though he hardly spoke it). But following the retrenchment, one pharmacist (Mr. Kankam), who traded with GNTC and had a pharmacy shop (Kanbros Pharmacy) opposite Accra Academy Secondary School at that time, decided to employ my father. Accordingly, it was my father’s humility and sense of duty that convinced Mr. Kankam to employ him. Years later, Mr. Kankam wanted me to go to Adisadel, where he had his secondary education.

But in spite of all these challenges, my father never showed any signs of irresponsibility at home. He lived as a man who had a benevolent responsibility to lead, provide, and protect his family. He was also generous to others. Because my father hardly showed that he lived on a shoestring, my infantile imagination was that he could provide all my needs. As I have said above, I never squirmed for even a minute that my father could not provide for me.

So, when I started nursery school at Daily Day Care Center at Expo 67 (Pig Farm, Accra) in 1987, I became the darling of the school’s proprietress, Aunty Grace. Aunty Grace trusted me that anytime she wanted her school fees, I was the best child among my older siblings to force my father to pay. And true to her words, anytime she told me my father had not paid school fees, I became disappointed in him. In such cases, I cried for literally everyone in my community to know that my father had not paid my schools. Since I grew up in Nicaragua Base (in the 1980s – 90s almost every child was born into and nurtured in a Base), the older guys of the Base would attempt to comfort me. But I could not understand how my father could not pay my school fees.

The reason I was impatient with my father was that I had instinctive confidence and trust in him that he could provide for my needs. Consequently, I wondered why he was not paying my school fees on time. Genetically, all children universally share these instinctive trust and confidence. Every child knows his parents are capable of providing everything. A child does not care about his achievements being written. A child is not even invited when adults are taking an important decision. A child is totally dependent on his parents for everything. A child expresses emotions without any inhibitions. A child loves his parents without flicking an eye. A child loves naturally. Consequently, while a child may have all kinds of faults and insufficiencies, in a normal, healthy family a child trust that his father will provide everything. The trust of a child in a normal family is instinctive.

When a child walks with his father, he does not fear or tremble over an oncoming car that appears to have lost its break. A child will simply smile because he is with his father. When a child goes to school and he is bullied, he does not worry so much, because he knows his father will take up the task of vengeance. And while a child has a low social standing, he does not suffer anxiety and depression. He is rather confident that all his needs will be supplied. The world never awards a child a degree or even publishes any accomplishment of a child, and yet a child is not bothered. A child does not fret that his name is not mentioned or listed in the hall of fame! A child is not even assigned an important task. He is not made a leader. He is not given standing ovation. He is not given a red carpet to walk on. His presence may not even be recognized. And yet, a child is happy and joyous all the time.

Looking at the qualities of children, Charles Dickens, an English writer and social critic in the nineteenth century, wrote most of his novels from the prism of children. In the Bible, Jesus compares His follows to children. He was, certainly, not admonishing them to be unproductive like children. He was not encouraging them to lose their sense of existence or duty. He was rather encouraging them to have the instinctive confidence and trust of children. As I have said, children have a proclivity towards trusting. They trust, even when they are not sure. They trust even when there is no hope that they will get what they want. As Christians, Jesus wants us to avoid worrying over the cares of this world (Matthew 5:25-34; Philippians 4:6-7). He encourages us not to worry when the world does not recognize us. He counsels us not to worry when we are treated as nonentities. As children, Jesus wants us to trust Him at all times. He expects us to have an instinctive confidence that He will supply all our needs according to His riches (Philippians 4:19).

Are you worried about finances, health, social recognition, food, clothes, accommodation, and job, know that Jesus will graciously provide! Even if He does not provide; if He does not heal, know that whatever He brings your way is for your ultimate good. His providence will see you through. If I could trust my father who was finite and limited in many ways to provide for me, why can't I trust the Almighty God, the creator, all-sufficient, and all-provider, to provide my needs (Matthew 7:11)?

As a child of God, to quote the words of Abraham Lincoln, ‘don't worry when you are not recognized, but strive to be worthy of recognition.’ Jesus said to us that we should be the light and salt of the world!