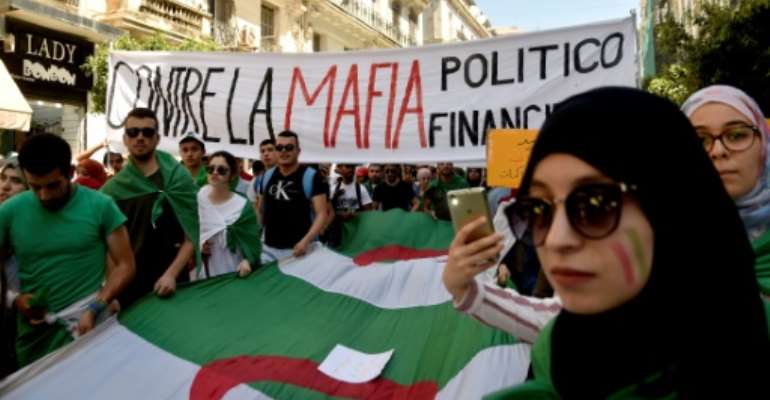 Protesting students hold a banner reading "against the politico-financial mafia" in Algiers on Tuesday. By RYAD KRAMDI (AFP)

A prosecutor said Tuesday that 45 people including senior officials connected to Algerian automobile tycoon Mahieddine Tahkout are under investigation for corruption and money laundering.

Of 56 persons of interest in the case, 45 are under judicial investigation, the Algiers prosecutor said in a statement broadcast by state television.

The investigating judge had "decided to place 19 of the accused in provisional detention and to conditionally release seven" suspects, the statement said.

The 19 others under investigation remained free without restrictions, it added.

A lawyer for Tahkout told AFP on Monday that the tycoon had been placed in provisional detention on corruption allegations.

Tahkout is a close associate of longtime leader Abdelaziz Bouteflika, who was forced to step down in April after weeks of mass protests.

Demonstrations have continued since the ailing president stepped down, as protesters demand that regime insiders also exit as a precursor to independent institutions being set up.

Thousands of students and teachers took to the streets of the capital on Tuesday, rejecting dialogue with interim President Abdelkader Bensalah.

Among those accused alongside Tahkout are his son and two of his brothers, 38 civil servants and three employees of Tahkout's businesses, according to the prosecutor.

The 45 under investigation are being probed for money laundering, concealing the illicit transfer of goods obtained through corruption, and squandering public money.

Among the remaining 11 persons of interest are a former prime minister, two former ministers and a current minister, the statement said, without giving names.

The positions occupied by the 11 at the time of the alleged events means they enjoy immunity, but their cases have been sent to the public prosecutor to decide on further action.

The justice ministry said Monday that Algeria's upper house would vote on June 19 on whether to lift the parliamentary immunity of two Bouteflika-era ministers -- Said Barkat and Djamel Ould Abbes.

Several prominent politicians and businessmen linked to Bouteflika have been detained or questioned in connection with corruption since the president was forced to step down after two decades in power.

Anti-LGBT Bill: Let's be careful and not generate intense ha...
37 minutes ago