Constitutional Reforms: Rawlings Is The ‘Proverbial Frog From The Pond’ 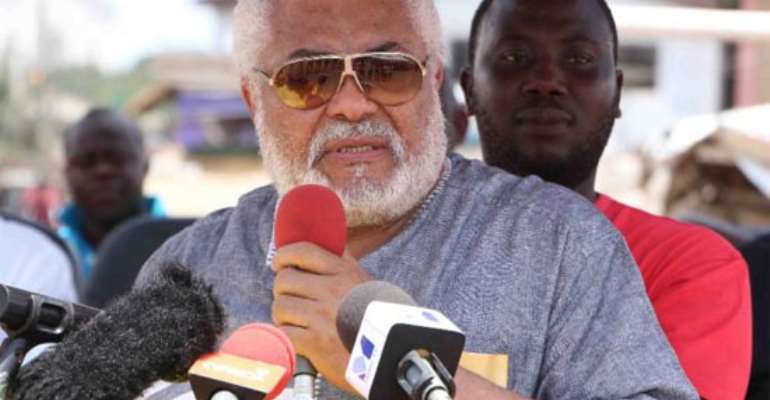 Undoubtedly, Ghana's military-engineered 4th Republic Constitution is unceasingly crying for crash reforms or amendments that will reflect the contemporary meaning and the essence of the rule of law consistent with multiparty democracy. Honestly, no Ghanaian living today can make effective case for an urgent need to amend this country's constitution than former President JJ Rawlings.

Remember, he torpedoed a democratically-written constitution, but now he appears to be a transfigured advocate of a “superior” democratic constitution, and “who born some of us by mistake” to second guess the former coup-plotter's sincerity.

For many of us who have been long-time critics and haven't hidden our mortal dislike for the political ideologies of Mr. Rawlings—a former military-dictator-turned-multiparty ruler—it may come as a bit surprise to some that this present writer is on the side of the recent suggestion by the ex-military authoritarian. The political reality pertaining to Ghana's present democratic experiment is that whether we admit or not the former (P)NDC leader Mr. John J. Rawlings “owns” the 4th Republic Constitution. So let us call Mr. Rawlings' bluff and put everything in the Constitution on the chopping board to explore ways to make it reflective of utilitarian body of document.

From the “culture of silence era” in the late 1980s up to the time the ban on party politics was lifted in 1992, a bunch of fearless Ghanaians at the time, including this writer, defied the threats of jail time and possible torture while consistently raising our disapproval against this very constitution. Taking inspiration from brave writers such as the Rt. Rev. Dr. Samuel Asante-Antwi, the late(s) Prof. Adu-Boahen, Atakora-Gyimah, Lawyer Obeng Manu and many others, as a young high school student just completed Sixth-Form (A-Level) education in Kumasi, I also began writing a series of scathing media articles regarding Rawlings' dictatorial regime.

In those days, the “Pioneer” and “Statesman” were some of the few newspapers bold enough to feature dissenting viewpoints against Rawlings' “one-man government” plus his newly-written fourth republic constitution. Soon after the NPP's “Stolen Verdict” episode in the 1992 involving the so-called multiparty elections supposedly won by Mr. Rawlings, I left the shores of the motherland disappointed for the States, having fought against P/NDC's reign of terror in my very early twenties.

The preceding historical context is to underscore the fact that all along some of us have had eternal reservations for this 4th Republic Constitution, because we knew it was written by Mr. Rawlings in office and for Rawlings out of office. His inputs and knowledge of the constitution are so profound that he has matchless understanding of the built-in fallacies/biases of this constitution. To say the least, it can't be understated that the Constitution was written under the direct influence of the then junta regime of Flt. Lt. Rawlings with the overall objective to serve the whims and fancies of his incoming civilian administration in 1993.

When the 258-member Consultative Assembly tasked to draft the 4th republic constitution presented its final product to then-Chairman Rawlings' (P)NDC dictatorship, there was no any objection or revision made to the document. It was pushed through a hastily organized referendum and the supine state-run media fawningly reported that about “92% Ghanaians approved” the Constitution.

This is suggestive that every serious-minded Ghanaian and believers of true multiparty governance needs to pay attention to Mr. Rawlings' clarion call for amendments of the Fourth Republic Constitution he immensely helped put together to support his sociopolitical agenda. Essentially, former President Rawlings' exhortation for constitutional amendments should wisely remind us of the proverbial “frog that emerges from a body of water with the news of the death of the dreaded crocodile.” Even if the “frog's” version of the sequence of events is not too credible, the natural response is to give him the benefit of the doubt because the frog lives in the same water with that giant reptile. After all, Mr. Rawlings is the “chief architect” of the Constitution under discussion. Obviously, he doesn't need that “protection” any longer.

Here is the former P/NDC leader in a sober admission of the severe flaws of the Constitution he assembled some people to write for him over two decades ago: “Over the years the indemnity clauses have emboldened certain characters to abuse their offices and profit themselves. The Constitution of the Fourth Republic was created by us, for us and to serve us, and in light of the 25 years, there is an unqualified need to reform or rewrite our current constitution. An urgent constituent assembly ought to be established with the necessary powers to rewrite the constitution” (graphic.com.gh; June 4, 2019).

Surely, it's fair game and within one's prerogative rights to question the timing or why it takes all these long years for the former leader of the AFRC and (P)NDC to call for “an urgent constituent assembly” to try to amend the 4threpublic constitution now. Nonetheless, if there is any intrinsic value of the amendment's question/message, it does not diminish because of the messenger—in this case Mr. Rawlings who happens to be the bona fide beneficiary of the said constitution. Here again, it's not about Mr. Rawlings and whatever ego trip he is on that should be the focus; rather, it's about this nation's constitutional advancement.

The ex-military/civilian president's call for amendment has less to do with hypocrisy than it is about highlighting issues of critical importance. Keep in mind the “Indemnity Clauses” were “backdoor postscripts” to the Constitution that were not subject to rigorous debate by the consultative assembly. Mr. Jerry Rawlings knows full well the constitution is “one-person-centered” and it cedes too much power to the executive side (for then Executive President Rawlings) as opposed to the legislative and judicial arms of the government. It is ironic, though, that many of the country's MPs worry about privileges, but the current Parliament itself is relatively spineless, a development that does not bide well for a boisterous multiparty culture.

Mr. Rawlings is correct; this constitution seems to have empowered some politicians to hide under some abstract concepts of “privileges and immunities” not to be held accountable to the people. Does anyone wonder why the Special Prosecutor, Mr. Martin Amidu, seems to be having hard time prosecuting the corrupt officials? Your guess here is as good as mine.

In any event, parliamentary/legislative immunities are primarily meant for deliberative functions of the MPs and not for the insulation against criminal prosecution and the due process of the law. The Bawku Central MP Mr. Mahama Ayariga's self-serving immunity argument is one of the reasons the 4th republic constitution needs critical reappraisal more than ever!

Doctors threaten strike from October 1 over arrears
34 minutes ago